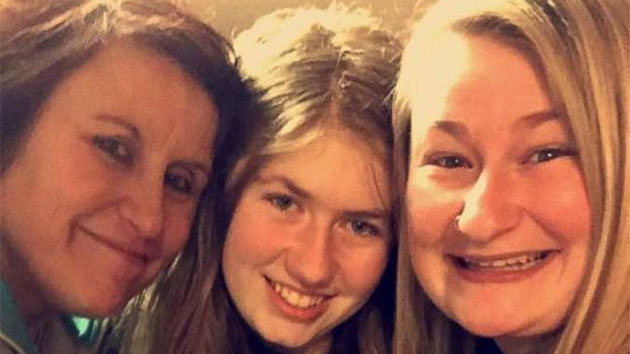 Courtesy Lindsey Smith (NEW YORK) — As the suspect charged with abducting 13-year-old Jayme Closs and killing her parents prepared to make his first court appearance on Monday, church-goers in the Wisconsin girl's hometown offered prayers of thanks on Sunday that she was found alive, and former friends of the alleged perpetrator struggled to understand his motive.

Jake Thomas Patterson, 21, of Gordon, Wisconsin, is expected to be arraigned Monday in Barron County Circuit Court on one count of kidnapping and two counts of murder.

"This is a very tragic situation. There is a substantial amount of information, interest, and emotion involved in this case," Patterson's lawyers Charles Glynn and Richard Jones said in a joint statement. "Mr. Patterson's legal team will be relying on the integrity of our judicial system to ensure that everyone's rights are protected and respected."

On Sunday, parishioners at St. Peter's Catholic Church in Cameron, Wisconsin — where the funeral of Jayme's slain parents, Denise and James Closs, was held on Oct. 27 — said a special prayer of thanks that the eighth-grader is safe.

"God was listening to everybody's begging. Multiple times we just said 'please,'" Patty Gerber, St. Peter's parish director, told ABC affiliate KTSP-TV in Saint Paul, Minnesota. "I believe in miracles, too. Whether you call this a miracle or not, I think the prayers of her family especially were answered."

Residents of Jayme's hometown of Barron continue to display blue ribbons, Jayme's favorite color, on homes and business, while signs were erected throughout the rural community reading, "Welcome Home Jayme."

Fitzgerald's department spearheaded the 88-day search for Jayme that started on Oct. 15 when a 911 hangup call was placed from the Closs home and a dispatcher reported hearing people yelling in the background. When sheriff's deputies went to the home, they found Denise Closs, 46, and her husband, James, 56, shot to death. Jayme was nowhere to be found and investigators immediately feared her parent's killer abducted her.

Authorities said Jayme escaped Thursday from a cabin in Gordon, Wisconsin, about 70 miles north of Barron, where she was held in captivity.

Shortly after Jayme escaped, police stopped and arrested Patterson, who they suspect targeted the girl and plotted her kidnapping. But why Patterson allegedly singled out Jayme to abduct remains a mystery to investigators, Fitzergald said.

"I just know that Jayme was the target of Mr. Patterson," Fitzgerald said. "He didn't know the Closses, he had no contact with the Closses that we've been able to uncover at this time."

"He had some connection to her, probably not directly," hypothesized Garrett, who worked as an FBI profiler. "He did not know her, but he has seen her someplace."

He said Patterson seems to fit the profile of someone who was "driven by fantasy and obsession."

"I guarantee you he planned this," Garrett said.

Dylan Fisher, who grew up with Patterson but hasn't had any contact with him since they graduated from high school, told ABC News that he was struggling to understand how his childhood friend could allegedly commit such a heinous crime.

"You know, you talk to this person every day, you don't know that three years from now you're going to hear about this," Fisher said. "So yeah, I'm asking myself a lot of questions and none of them make sense."

Fisher's mother, Victoria Fisher, added: "Knowing that things like that were in his mind, that's what scares me. It could have been my daughter."

Meanwhile, Jayme is with her family, who have been showering her with love.

Her aunt, Jennifer Smith, told ABC News that she and her family are thankful that so many people in her community did not give up hope on finding Jayme alive.

"I'll never forget that," Smith said. "I thank them from the bottom of my heart."