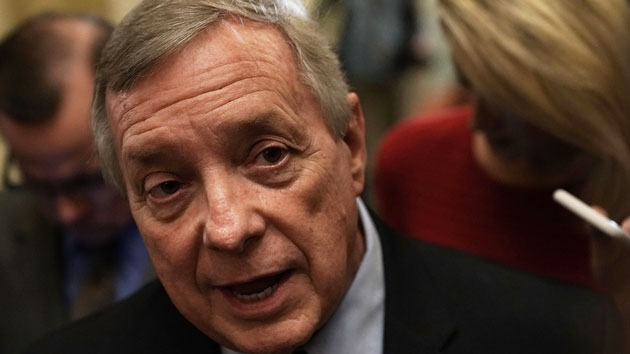 Alex Wong/Getty Images(WASHINGTON) — As the partial government shutdown enters its fourth week, Sen. Dick Durbin, D-Illinois, told ABC News Chief Anchor George Stephanopoulos on Sunday that he believes President Donald Trump needs to "put an end to this shutdown and put everything on the table."
"We're not going to stand here and be blamed for this. We believe the government should be opened," Durbin said on "This Week."
"There should be timely negotiations on border security after the government is open."
Durbin, the minority whip, has been involved in the numerous meetings between Trump and congressional leaders. Last week, he visited Transportation Security Administration workers who are on the job without pay at Chicago’s O’Hare International Airport. He told reporters that there is a “breaking point” for federal workers who aren’t receiving pay.
The partial government shutdown entered its 23rd day Sunday with no signs of a potential deal.
An ABC News-Washington Post poll published on Sunday showed 53 percent of those polled blamed congressional Republicans and Trump for the ongoing shutdown, while only 29 percent place the blame on congressional Democrats.
The poll also showed increased support for a border wall with 42 percent for it, though a majority of 54 percent still oppose it.
In a series of tweets on Saturday and Sunday, Trump continued to blame Democrats for the shutdown. In one, he claimed that "Democrats could solve the Shutdown in 15 minutes!"
Durbin said that the president could "open the government tomorrow," and that "one phone call from Mitch McConnell can get it started."
Over 800,000 federal workers missed their first paychecks on Friday. Last week, Trump said that he could relate with the unpaid workers, but claimed many of them support his wall proposal.
In the Oval Office on Wednesday, Trump told ABC News Chief White House Correspondent Jonathan Karl that he wouldn't sign bills to pay federal workers because that strategy would "would never get anything done."
Trump has continued to float the idea of declaring a national emergency in order to redirect Pentagon funds to build a border wall, a maneuver that would circumvent Congress. ABC News reported that there is not a legal consensus on whether the president would ultimately succeed in declaring a national emergency in this case.
When asked whether a national emergency is a "likely" way out of the shutdown, Durbin said while he "doesn't know" if such a declaration by the president is the way out of the current situation, he’s concerned about precedent.
"If this president is going to turn to national emergencies every time he disagrees with Congress, I'm against it,” he said. “Make sure the branches of government are bound by the same Constitution."
One potential legal argument against the declaration could come from landowners along the border, according to Brookings Institution Senior Fellow William Galston. Galston told ABC News on Thursday that "the landowners whose property was seized to build a wall would have suffered a concrete injury that would entitle them to go to court."
Durbin also addressed new reporting regarding investigations into Russian interference in the 2016 U.S. elections.
On Friday, the New York Times reported that days after the president fired then-FBI Director James Comey, the FBI initiated a counterintelligence inquiry to investigate whether Trump "had been working on behalf of Russia."
The Washington Post reported on Saturday that Trump had gone to "extraordinary lengths to conceal details" of his meetings with Russian President Vladimir Putin, even from members of his administration.
White House Press Secretary Sarah Sanders said in a statement that "The Washington Post story is so outrageously inaccurate it doesn't even warrant a response."
Stephanopoulos asked Durbin what the Senate will do about the revelations.
Durbin said the Republican majority holds the power to investigate on behalf of Senate.
"The Senate is controlled by Republicans," Durbin said. "We found in the last two years they were unwilling to hold investigative hearings."
He said that he doesn't understand why Trump is "so chummy" with Vladimir Putin, and that the Washington Post report about the president’s confiscation of his interpreter's notes "raises questions about the relationship between this president and Putin."
Meanwhile, Durbin spoke about the "delicate political situation" surrounding oversight of the Mueller investigation, which has been in question since Jeff Sessions was forced out as attorney general.
"Bill Barr had better give us iron-clad, rock bottom assurances in his independence and his willingness to step back and let Mueller finish his job."
The confirmation process for Barr, who is nominated to be the next attorney general, is underway. Hearings are expected this week.
Copyright © 2019, ABC Radio. All rights reserved.