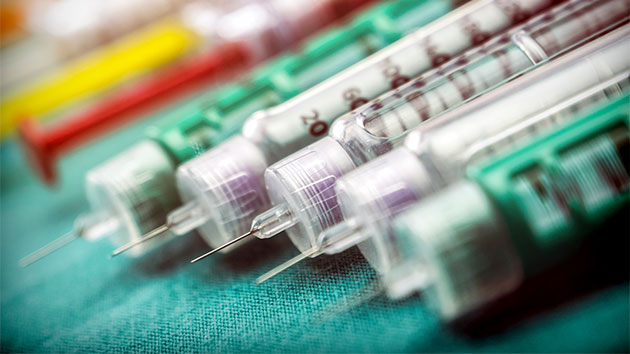 (NEW YORK) — Prescription drug prices are rising much faster than inflation rates in the United States, and patients who need life-saving medications are suffering the consequences – sometimes fatally.

Newer, safer products entering the market are one reason that costs are going up, but they’re not the only one. Drug companies are also inflating the price of existing, brand name drugs, according to a recent study published in Health Affairs, which analyzed nearly 28,000 national drug codes —- unique numbers that identify every legally manufactured medication in the U.S. —- from 2008 to 2016.

The prices of brand name injectable drugs, for example, rose by 15 percent each year during that time period, the study found. These injectables include brand name insulin for people with Type 1 (T1) diabetes.

Stock said that although her current prescription is covered by Iowa Medicaid, the rising costs once forced her to ration her medication. Type 1 diabetics require insulin to control their blood sugar levels, and and without insulin they will die.

Unlike many medications, insulin is like oxygen to Type 1 diabetics – they cannot live without it. Diabetic ketoacidosis (DKA) will set in within hours or days in a T1 diabetic, and the patient will go into a coma and die without insulin –- the only available treatment.

Lantus, a popular brand of long-acting insulin that has been on the market for over a decade, increased in price by 49 percent in the year 2014, the study found.

Meanwhile, the costs of oral brand name drugs nearly doubled in the nine years that were studied. Each year, the prices of these drugs increased at five times the rate of U.S. inflation. Generic oral drugs had the smallest price increases, with a 4.4 percent increase each year —- and yet, this was still double the rate of inflation. Costs for specialty medications, such as those for hepatitis C, rose 13 times faster than inflation, according to the study.

Other companies cannot create an alternative medication during the patent period, which allows the manufacturer of the new drug to make back the money spent on research and development.

When a drug patent expires, however, a generic may not come onto the market. Drugs made from living cells, such as insulin, are expensive to manufacture as a generic and not considered identical to the brand name form. The FDA requires further scrutiny in these cases, which is costly.

When Stock would ration her insulin, her blood sugar “would always be above 200; normal is 90 to 120,” she said, adding that in addition to always feeling tired, thirsty and sick, she also had to undergo “surgery a few times to drain infection from wounds that wouldn’t heal.”

In 2017, 26-year-old Shane Patrick Boyle was out of work so he could care for his dying mother in Arkansas, and waiting for his Affordable Care Act insurance to kick in, according to The Nation and a graphic art website called The Nib. A Type 1 diabetic, Boyle couldn’t afford his life-sustaining insulin, so he launched a GoFundMe page to raise insulin money. Boyle died two days after his mother did. He was $50 short of his GoFundMe goal.

Three months later, T1 diabetic Alec Raeshawn ‘Big Al’ Smith, 26, was found dead in his Minnesota apartment, after rationing his insulin because he had aged out of his parents’ insurance and couldn’t afford his own, The Nation reported. The cause of death was DKA, according to his obituary.

Some drug companies have been held accountable for the rising prices. The state of Illinois recently recovered $135 million from a settlement made with Teva Pharmaceuticals USA, Inc. following a 2005 lawsuit filed by Attorney General Lisa Madigan against 47 drug makers. The lawsuit alleged that Teva fraudulently inflated wholesale prices to receive more money in Medicaid reimbursements.

According to the White House Council of Economic Advisers, prescription drugs prices fell almost 3 percent in 2018 when adjusted for general inflation, the largest decline in prescription drug prices in 46 years.

J&J said that the average price rise for about two dozen drugs will be 4.2 percent this year, according to Reuters. The pharmaceutical company said rebates and discounts that were negotiated with payers -— such as insurance companies, private employers, and the government -— would improve drug access for patients since they would contribute to drops in net prices.

For Stock, however, any price increase on drugs that are required simply to live are unethical.

“The drug companies are holding our lives hostage so they can profit. Everyone needs insulin to live, but only diabetics have to pay for it”.

Dr. Naomi Kaplan is a resident physician in physical medicine and rehabilitation, and a member of the ABC News Medical Unit.