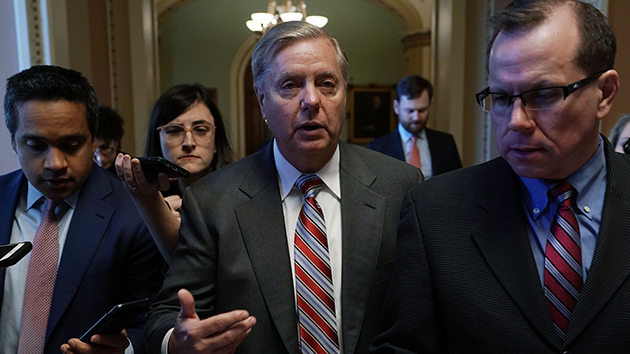 Alex Wong/Getty Images(WASHINGTON) — Frustrated with congressional gridlock, the president announced the most sweeping executive action on immigration in decades, moving to protect millions of undocumented immigrants from deportation as the leader of the opposing party in Congress accused him of acting like an emperor.
That battle between President Barack Obama and congressional Republicans that began in 2014 touched off years of legal battles — including a Supreme Court decision in 2016 blocking Obama’s plan — a struggle overshadowing Washington as President Trump mulls declaring a national emergency at the U.S.-Mexico border to facilitate construction of a border wall congressional Democrats refuse to fund.
And as the shutdown passes a milestone as the longest in modern U.S. history, some Republicans have become unlikely cheerleaders of Trump's tactics. These are some of the same lawmakers who criticized the Obama administration for executive actions on immigration to protect Dreamers, the undocumented immigrants brought to the United States as children.
In a statement in November of 2014, Sen. Lindsey Graham, R-S.C., an advocate of comprehensive immigration reform in Congress, called Obama’s executive action “a tremendous presidential overreach.”
After an unsuccessful push this week with other senators to work up a potential solution to the impasse, Graham took to Twitter to call on Trump to declare a national emergency to construct the border wall.

— Lindsey Graham (@LindseyGrahamSC) January 11, 2019
Earlier this week, he sounded far more skeptical.
“That’s not my preferred route. I don’t know legally if you can do that.”
Democrats have said the move — coming at an impasse in government shutdown negotiations prompted by demands to fund the wall — could be an abuse of power by Trump, and would trample over Congress’s constitutional authority over federal spending.
They are preparing legislative and legal responses to a declaration, which can only be blocked by the passage of a joint resolution through the House and Senate with veto-proof majorities, an unlikely outcome given Republican’s control of the Senate.
Republicans who support the president’s ability to declare a national emergency reject the comparison of their position to their stances against Obama’s actions, pointing to the Supreme Court’s 2016 decision to leave in place a lower court’s opinion blocking Obama’s expanded executive action.
“The courts have ruled on his exceeding his authority, and have ruled that he did exceed his authority,” Rep. Virginia Foxx, R-N.C., told ABC News.
Foxx said on Friday she supports Trump’s ability to declare a national emergency, governed today by the National Emergencies Act of 1976.
“How can you say that it is taking authority away when Congress itself gave the president such authority?” she said.
“Everybody says he has the right to do it, but we also know that if he does it there will be lawsuits, it’ll get tied up in courts,” Rep. Roger Williams, R-Texas, told ABC News.
“What does that fix? It gets back to the best fix is to go through Congress.”
Vice President Mike Pence on Thursday told reporters at the Capitol that Trump believes “he has an absolute right to declare a national emergency under his authority as president of the United States,” and dismissed one reporter’s comparison of his position to his opposition to Obama’s actions in 2014.
“I don’t know that I ever questioned the constitutional authority the president has [to declare a national emergency],” he said.
Both Democrats and Republicans conceded that should Trump declare a national emergency, the move would ultimately be resolved by the courts.
“That seems the way all our problems have been solved these days,” Foxx said.
Rep. Henry Cuellar, D-Texas, said Republicans and the White House should be concerned of setting a precedent followed by future Democratic presidents.
“They should be concerned that if he wants something passed, he or she is going to bypass the Congress by going this particular route, declaring an emergency.”
"Tomorrow, the national security emergency might be climate change, so let's seize the fossil fuel plants or something,” Sen. Marco Rubio, R-Fla., said in an interview with CNBC, suggesting how Democrats would seize on Trump’s actions to justify their own.
“Maybe it's an exaggeration, but my point is we've got to be very careful about endorsing broad uses of executive power."
Copyright © 2019, ABC Radio. All rights reserved.