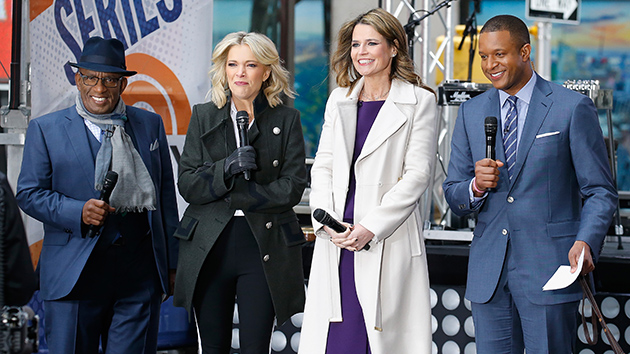 John Lamparski/Getty Images(NEW YORK) — Megyn Kelly's rocky tenure at NBC is over.
Kelly, a former Fox News host, joined the network in 2017 on a large deal and in three marquee roles. She hosted a daytime talk show, started a Sunday night news show and was to be featured in regular political coverage on the network's news programs.
All three roles quickly fell apart as Kelly struggled with attracting viewers and became embroiled in a number of controversies.
NBC delivered the news of Kelly's exit with one sentence late Friday.
"The parties have resolved their differences, and Megyn Kelly is no longer an employee of NBC," a spokesman said.
NBC News reported Kelly will leave the network with the remainder of her three-year, $69 million deal — about $30 million.
Kelly's daytime talk show was cancelled in October after she made controversial statements about blackface.
She brought up blackface during a segment the week before Halloween while holding a round-table discussion with an all-white panel about offensive costumes.
"But what is racist?" she wondered aloud. "You do get in trouble if you are a white person who puts on blackface in Halloween or a black person who puts on white face for Halloween. Like, back when I was a kid, that was OK as long as you were dressing up as, like, a character."
She then defended a white reality star who dressed as singer Diana Ross, saying, "I felt like, who doesn't love Diana Ross? She wants to look like Diana Ross for one day, and I don't know how that got racist on Halloween."
Kelly gave a tearful apology on the show the next day.
Both Kelly's morning show and Sunday evening news program struggled to find viewers.
The 9 a.m. hour, hosted by Kelly, shot up 10 percent in viewers the month after her exit, according to Nielsen numbers. "Sunday Night with Megyn Kelly" aired just eight episodes in 2017 — the last being a much-criticized interview with Russian President Vladimir Putin.
Copyright © 2019, ABC Radio. All rights reserved.