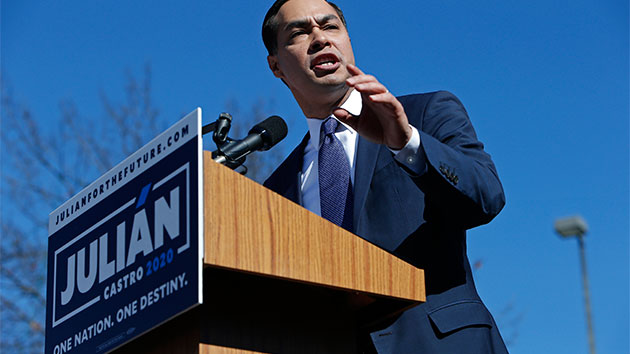 Edward A. Ornelas/Getty Images
Posted on January 12, 2019 by ABC News

Edward A. Ornelas/Getty Images(SAN ANTONIO, Texas.) — Julian Castro, former mayor of San Antonio and housing chief during the Obama administration, formally announced on Saturday that he is seeking the Democratic nomination for the 2020 presidential election.

“Today we’re falling backwards instead of moving forward. And the opportunities that made America, America are reaching fewer and fewer people,” he said, flanked by his wife Erica and children Carina and Cristian in San Antonio's Plaza Guadalupe, among a crowd of a couple hundred people. “That’s why we are here today. Because we’re going to make sure that the promise of America is there for everyone.”

Introduced by his mother, local activist Rosie Castro, he said the country was going through a crisis of leadership under President Donald Trump.

Castro described the American Dream as not being a "sprint or a marathon, but a relay. My story wouldn't be possible without the strong women who came before me and passed me the baton. Because of their hard work, I have the opportunity to stand here today."

“My family’s story wouldn’t be possible without a country that challenged itself to live up to the promise of America. That was the point of the American Dream: It wasn’t supposed to be just a dream. America was the place where dreams could become real, but right now, the relay isn’t working,” he said.

Castro is the first Mexican-American and first San Antonio native to seek the White House.

Asking for an America that is the “smartest, healthiest and fairest” nation on Earth, Castro touted his support for universal health care; pre-kindergarten for all, based on a program he sponsored as mayor of San Antonio; affordable higher education, justice and immigration reform, and more attention on combating climate change. He said that if he is elected, his first executive action would be to recommit the U.S. to the Paris Climate Accord that President Trump abandoned last year.

Castro had harsh words for the president as the nation's government shutdown continues due to conflicts over building a wall along the southern border.

“Yes, we must have border security, but there is a smart and humane way to do it. And there is no way in hell that caging children is keeping us safe," he said, telling the crowd his grandmother died regretting that she wasn't able to say goodbye to her mother when she left Mexico for the U.S. in the 1920s.

Acknowledging that his run for the White House was a long shot, as a growing number of high-profile Democrats are expected to enter the race, Castro referred to his hometown of San Antonio.

“There are no frontrunners born here, but I've always believed that with big dreams and hard work, anything is possible,” he said.

In response to Castro's announcement, a spokesman for the Republican National Committee called Castro one of the “biggest lightweights to ever run for president,” saying he was a weak mayor and questioning his tenure as Housing and Urban Development secretary.

“This is obviously just another desperate attempt to become someone else’s running mate,” said RNC spokesman Mike Arens in a statement.