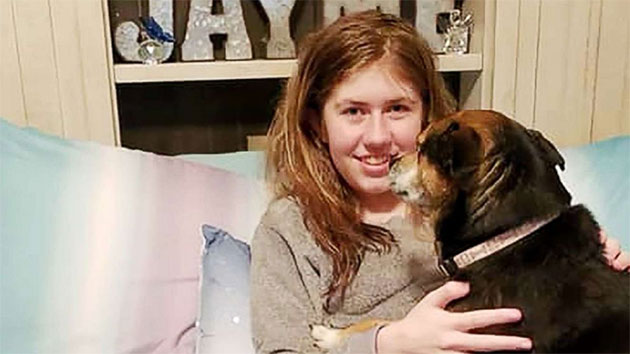 Jennifer Smith(NEW YORK) — New photos released Saturday of Jayme Closs, the 13-year-old Wisconsin girl who spent 88 days in captivity after being abducted by her parent's alleged killer, show her smiling and cuddling with her dogs and posing for a selfie with an aunt who had prayed for her safe return.

"Jayme had a pretty good night sleep," Jayme's overjoyed aunt, Jennifer Smith, said in a Facebook post on Saturday. "It was great to know she was next to me all night. What a great feeling to have her home."

Authorities said Jayme escaped Thursday from a cabin where she was being held by a man who allegedly kidnapped her in October, according to officials at the Barron County Sheriff's Department, who spearheaded the search for her.

She was found in Gordon, Wisconsin, about 70 miles north of her hometown of Barron

After escaping, Jayme approached Jeanne Nutter, who was out walking her dog. Nutter told ABC News that Jayme looked disheveled, cold, thin and wearing shoes too large for her feet.

"I need help," Jayme said in a soft voice, according to Nutter. "…I’m Jayme Closs, I don’t know where I’m at."

After escaping, Jayme approached Jeanne Nutter, who was out walking her dog. Nutter told ABC News that Jayme looked disheveled, cold, thin and wearing shoes too large for her feet.

"I need help," Jayme said in a soft voice, according to Nutter. "…I’m Jayme Closs, I don’t know where I’m at."

Jake Thomas Patterson, 21, of Gordon, was arrested and charged with kidnapping the eighth-grader and killing her parents, Denise and James Closs, officials said. Patterson is expected to make his initial court appearance on the charges on Monday.

Barron County Sheriff Chris Fitzgerald said Patterson had specific intentions to kidnap Jayme, but it remains unclear how he became aware of the girl, Fitzgerald said.

Investigators have yet to comment on what Jayme endured during her 88 days in captivity.

Her family said Saturday that she is "full of big smiles today."

"It will be a long road but we are family strong and we love this little girl so much!!" Smith wrote on Facebook. "We will do anything and everything!! My beloved sister Denise pooh and brother in law Jim can rest at peace and I keep assuring them Jayme is safe and we will make sure forever."

Jayme's ordeal began on Oct. 15, when a 911 hangup call was placed from her home and a dispatcher reported hearing people yelling in the background.

When sheriff's deputies went to the Closs family home, they found Denise Closs, 46, and her husband, James, 56, shot to death. Jayme was nowhere to be found and immediately investigators feared her parent's killer abducted her.

A massive search for the girl was launched and thousands of volunteers helped comb the area near her rural home. A reward of $50,000 was offered for information on the girl's whereabouts.

But in the end, Fitzgerald said, Jayme ended up saving herself.

"It's amazing, the will of that 13-year-old girl to survive and escape," Fitzgerald said. "That comes from the hope and the prayers in this community and what everybody did."