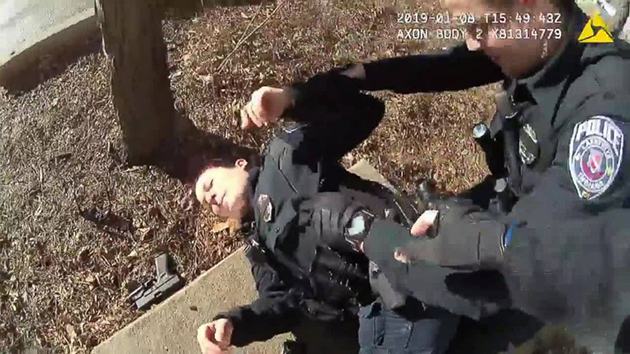 Lafayette Police Department (LAFAYETTE, Ind.) — A police department in Indiana released shocking footage of an officer accidentally shooting his partner in the back while searching for a fugitive earlier this week.
Lane Butler, who was "just days" from celebrating her third anniversary with the Lafayette Police Department, is still in the hospital in serious but stable condition after the Jan. 8 shooting.
Three officers, including Butler and her partner, Aaron Wright, entered a home looking for a suspect wanted on an outstanding warrant, police said. Police did not find the suspect, but inside the home was a large dog.
The video shows Butler exiting the home with Wright following her. The dog, which police said escaped its cage, can be heard barking loudly before Wright — with his gun drawn — suddenly shoots Butler in the left shoulder.
Though it is not visible in the video, police said Wright was attacked by the dog from behind, and accidentally fired his gun.
Butler immediately collapsed to the ground outside the home and the other officers can be heard in the video shouting, "What happened? What happened?"
"Our conclusion in this incident was this was not a result of an act of negligence, carelessness or otherwise reckless behavior," Lafayette Police Chief Patrick Flannelly said at a press conference Friday. "It was accidental."
Wright is not expected to face disciplinary action.
"Officer Butler is an amazing public servant and is a dedicated and valued member of our agency," the department said in a press release. "She is demonstrating tremendous courage and strength and she fights to recover from her injury."
Butler is recovering at Franciscan Health Lafayette East: "We again just want to extend our prayers to her and her family and all of her loved ones and let them know that they will have our continued support," Flannelly said. "We're thankful that she is doing well and improving. That's the most important thing."
The body cam video from Wright shows he and other officers immediately assisting Butler. She was wearing a bulletproof vest, however, she was struck above it, police said.
Wright sprints two blocks to flag down another police car responding to the scene, but after first putting Butler in the rear seat, an ambulance arrives and they load her into the back.
Butler appears conscious throughout, but she can barely stand and eventually needs to be carried.
Copyright © 2019, ABC Radio. All rights reserved.