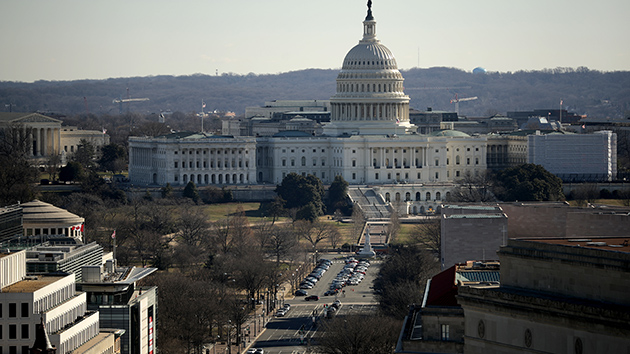 Chip Somodevilla/Getty Images(WASHINGTON) — The 22-day partial government shutdown became the longest shutdown in United States history, breaking a record from 1996 on Saturday.
President Donald Trump and Congress continue to dispute funding for a wall at the southern border, a proposal backed by the president.
Meanwhile, nearly 800,000 federal workers are affected — many of them missed their first paychecks since the shutdown started on Friday, according to the American Federation of Government Employees. Another one-third will experience a missed paycheck on Monday, with the rest turning up empty on Tuesday.
About half of those workers — 420,000 — are required to work without pay.
On Friday, the closure tied the longest government shutdown in history, which stretched 21 days from December 1995 to January 1996 under President Bill Clinton. A November 1995 Washington Post/ABC News survey found that respondents put most of the blame on the Republican Congress instead of the Clinton administration.
Throughout American history, government shutdowns have been a symbol of dysfunction within the government. Between 1976 and 1996, the government shut down 17 times.
In past shutdowns, federal workers have received back pay after the government resumed operating. But an unknown number of contractors are unlikely to receive compensation.
Negotiations came to a standstill this week after a tense meeting between Trump and Democratic leaders. After refusing the president’s proposal to fund a wall at the southern border, Democrats claimed the president threw a “temper tantrum” walking out of the meeting.
“It’s cold out here and the temperature wasn't much warmer inside the Situation Room," House Speaker Nancy Pelosi said.
The vice president denied those claims insisting the president was calm. "The president walked into the room and passed out candy," Pence said. "It's true. I don't recall him ever raising his voice or slamming his hand," Pence said.
Trump took to Twitter to call the meeting “a total waste of time.” On Thursday, the president signaled that he may declare a national emergency at the border if his administration and Democrats remain without a deal. The White House has directed the Army Corps of Engineers to explore funds in its budget to build the wall. He also canceled his trip to the World Economic Forum in Switzerland citing "Democrats intransigence on border security."
So far, the Trump administration has tried to blunt the impact on the general public by promising to maintain food assistance through February and bringing back Internal Revenue Service personnel to process tax refunds.
But the longer the shutdown lasts, the more federal agencies will be operating in unknown territory.
One big question is whether subsidies for low-income housing could be at risk. The Department of Housing and Urban Development announced this month that 1,150 contracts with landlords have already expired and that another 500 will expire in January and 500 in February.
HUD officials say evictions have not happened in previous shutdowns.