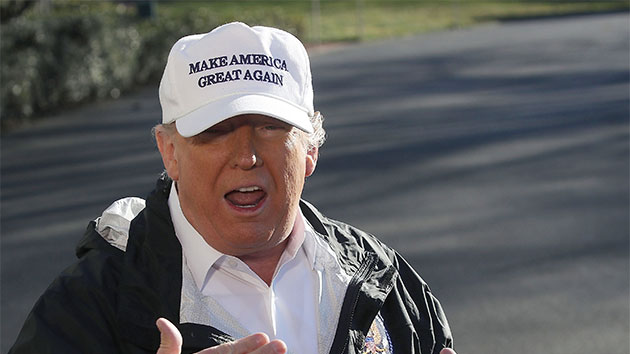 Mark Wilson/Getty Images(WASHINGTON) — On Day 21 of the partial government shutdown, President Donald Trump was getting conflicting advice Friday from Republican senators over whether he should go ahead and declare a national emergency as he's said he 'probably' would do to get funding for his proposed border wall.

Trump ally and new chairman of the Senate Judiciary Committee, Sen. Lindsey Graham, a Republican from South Carolina, met with the president at the White House on Friday afternoon and in a tweet afterward wrote, "Mr. President, Declare a national emergency NOW. Build a wall NOW."

Just met with President @realDonaldTrump and his team.
It’s clear to both of us that Democrats don’t want to make a deal and will never support border wall/barriers.

But other Republicans have warned the president against using his executive power to circumvent Congress and use funds allocated to the military to build a wall, saying it would set a dangerous political precedent.

"I think the president should not do it. I think as a member of Congress I ought to be very selfish about the constitutional powers that we have to appropriate money. I think it might be a bad precedent," Sen. Chuck Grassley, R-Iowa, said Friday morning to CNN.

"For people on my side of the aisle, one of the concerns we should have is if today the national emergency is border security, and it entitles him to go out and do something — we all support that," Sen. Marco Rubio, a Flordia Republican, told CNBC.

"Tomorrow. the national-security emergency might be climate change, so let's seize the fossil-fuel plants or something. Maybe it's an exaggeration, but my point is we've got to be very careful about endorsing broad uses of executive power."

GOP Sens. Mitt Romney of Utah Rob Portman of Ohio both said they don't want the president to declare a national emergency.

Democrats, meanwhile, have vowed to introduce a resolution to overturn an emergency declaration and block Trump and have promised quick court challenges if he makes the move.

As of Friday, there were no negotiations scheduled and no end in sight to the current impasse between Trump and congressional Democrats over border wall funding, with the government shutdown tying the record for the longest in American history.

And on Friday, thousands of the more than 800,000 federal workers furloughed missed their first scheduled paychecks during the shutdown.

The president traveled to McAllen, Texas, on Thursday to draw attention to his continued demands for $5.7 billion for a wall along the southern border, repeating that if negotiations broke down, he was likely to declare a national emergency to secure funding.

The White House has directed the Army Corps of Engineers to find money designated for disaster relief projects for the wall, sources tell ABC News.

On Friday, the president laid the groundwork to his potential claim of a national emergency by tweeting about the situation he observed while on the border.

"Humanitarian Crisis at our Southern Border. I just got back and it is a far worse situation than almost anyone would understand, an invasion! I have been there numerous times – The Democrats, Cryin’ Chuck and Nancy don’t know how bad and dangerous it is for our ENTIRE COUNTRY," Trump wrote, referring to his standoff with Senate Minority Leader Chuck Schumer and House Speaker Nancy Pelosi.

"The Steel Barrier, or Wall, should have been built by previous administrations long ago. They never got it done – I will. Without it, our Country cannot be safe. Criminals, Gangs, Human Traffickers, Drugs & so much other big trouble can easily pour in. It can be stopped cold!" He continued.

Humanitarian Crisis at our Southern Border. I just got back and it is a far worse situation than almost anyone would understand, an invasion! I have been there numerous times – The Democrats, Cryin’ Chuck and Nancy don’t know how bad and dangerous it is for our ENTIRE COUNTRY….

…The Steel Barrier, or Wall, should have been built by previous administrations long ago. They never got it done – I will. Without it, our Country cannot be safe. Criminals, Gangs, Human Traffickers, Drugs & so much other big trouble can easily pour in. It can be stopped cold!

"While some in the public debate say this is a manufactured crisis, I expect the men and women in uniform here and those that might be looking on know the truth of it," he said. The vice president said 27,000 people crossed the border in December, at the highest levels seen since the president took office. "It is putting an extraordinary burden on us border patrol and customs officers."

“We have a humanitarian crisis on our southern border and it demands action by Congress,” Pence said. He added that the administration will continue to "keep fighting to build the wall and give you the resources you need to do your job."

Pence told the officers gathered, all of whom are working without pay, that at the president's direction the administration has "taken steps to mitigate the impact of this partial shutdown," adding that the House had passed legislation to ensure back pay when the government reopens.

Democrats have said, however, that they will not capitulate to the president's demands for wall funding in order to reopen the government.

The Senate adjourned Friday until the beginning of next week, meaning the partial government shutdown will continue until Day 24 at a minimum.

Democrats push for party unity as GOP unites to block voting rights bill
DOJ drops civil lawsuit against former Trump national security adviser John Bolton
Crisis at the border: How it happened and what is being done
The fight to preserve California’s mighty sequoia trees as fire seasons, climate change worsen
Still a summit secret: What happened in Helsinki between Putin and Trump?
Trump allies leaned on DOJ to push probes into 2020 election fraud claims