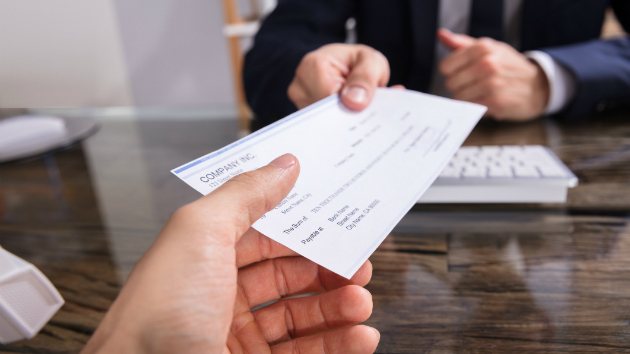 AndreyPopov/iStock(WASHINGTON) — Friday is payday for many Americans, but not for hundreds of thousands of federal workers affected by the government shutdown. They're missing their first paychecks as Congress and President Donald Trump continue feuding over whether to build a border wall.
Friday is day 21 of the partial government shutdown, which this weekend could become the longest in U.S. history.
An estimated 800,000 federal workers are either on furlough or are required to work without pay, with no deal in sight.
Federal agencies stagger pay cycles — employee checks are issued on different days. One major union, the American Federation of Government Employees, estimated that by Friday about third of the affected 800,000 workers will miss their first paychecks. Another third will miss theirs on Monday, with the remaining missing theirs on Tuesday.
Tony Reardon, head of the National Treasury Employees Union, which represents many IRS and Border Patrol workers, called Friday an "ominous day" because it's the day the shutdown finally hits home for many Americans.

"Federal employees started this shutdown nervous and anxious about their future," he said. "Today, many of them will be downright terrified about whether they can make their car payment, their mortgage, their day care bill or their children's tuition bills."
The government shutdown began Dec. 22 after Trump insisted on a border wall as part of a spending package, and congressional Democrats balked. The impasse has led to speculation the president will use a national emergency declaration to build the wall, without direct congressional approval.

Hundreds of federal workers across the country on Thursday organized demonstrations against the shutdown. Rallies were held in Washington, D.C., Detroit, Dallas, and Ogden, Utah.
In past shutdowns, federal workers typically received back pay after the government resumed operating, but an unknown number of contractors are unlikely to receive compensation.
One union that represents security guards and custodians, SEIU 32BJ, said it estimates some 600 of its members who work in the nation's capital as contractors will go without their first paychecks Friday — paychecks that most of those employees can't afford to miss.