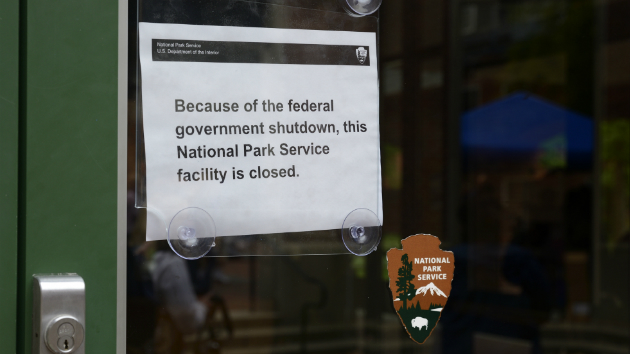 jimplumb/iStock(WASHINGTON) — Amid reports that national parks are being damaged during the government shutdown, the nonprofit National Park Foundation is launching a dedicated fund to raise money to help those parks recover.
During the partial government shutdown open-air national parks remained open, but with minimal staff. There have been reports of excess trash, visitors driving off road and concerns that visitors could be at risk of injury or damaging the land without rangers to reinforce park rules.
The most prominent example is Joshua Tree National Park, which almost closed this week to deal with damage including destroyed Joshua trees. But National Park Foundation President Will Shafroth said there are likely problems and damage that the public and the park service don't even know about yet.
"When the parks reopen they'll need to do some assessment of need and deployment of resources both people and money to address that need," he told ABC News on Thursday.
The National Park Service announced that it will tap into money collected from visitor fees to bring back staff for trash collection and safety services during the shutdown. Those fees and money raised by outside groups are typically earmarked for maintenance projects or improvements from the parks.
Separately the National Parks Conservation Association, a public lands advocacy group, said in a statement over the weekend that the use of the visitor fees robs already struggling parks of money needed for previously delayed upgrades, such as improving accessibility, renovating restrooms and building roads.
"It’s incredibly concerning that the acting Interior secretary is putting political pressure on Superintendents to keep parks open at the expense of parks’ long-term needs and protection," Theresa Pierno, president and CEO for the National Parks Conservation Association, said in a statement.
The National Park Foundation plans to work with park service officials and groups that work closely with national parks to determine where the money is the most needed after the shutdown ends and parks are fully staffed.
The National Park Foundation was created by Congress to collect donations and support the National Park Service but it is not a government entity.
Shafroth said since the shutdown started the group heard from donors and other parks supporters looking for ways to help, but they didn't want to direct more volunteers or visitors to the parks while they didn't have the full staff to manage them.
He said he doesn't want to dwell on whether keeping parks open during the shutdown is the right decision or if money from the National Parks Foundation or other groups that support parks could be better used on other projects.
"We are all about supporting the parks no matter when they need it, in all kind of ways this is a situation that's happening in real time, it is what it is and we just want to make sure the parks are restored," he said.
Copyright © 2019, ABC Radio. All rights reserved.