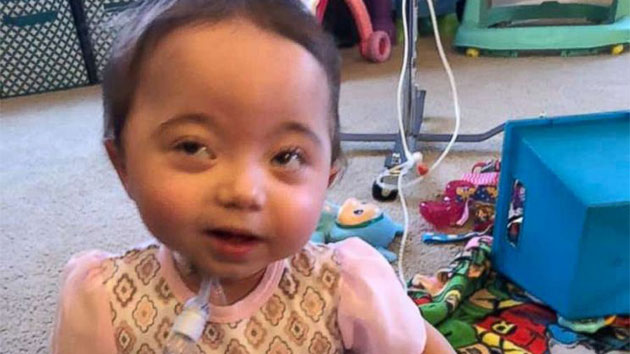 Allie McKinney(NEW YORK) — A stay-at-home mom whose family is struggling to make ends meet as the government shutdown stretches into one of the longest in U.S. history has a message for President Donald Trump: Come to Walton, Kentucky, and let's talk.

Allie McKinney, 28, is mom to 1-year-old Harper, born at just 26 weeks weighing one pound and unable to breathe without a ventilator. McKinney, a former social worker, quit her job to tend to Harper and burned through their savings during Harper's 302-day stay at Cincinnati Children’s Hospital.

Then came the government shutdown. Harper’s dad, Chris Rachford, is still working nights doing data entry at the IRS facility nearby. But because of the shutdown that began Dec. 22, his paycheck on Monday will likely be zero.

While the family relies on Medicaid to pay for much of Harper’s care, like therapy and medical equipment, it's dad’s income that puts food on the table and covers gas and insurance, McKinney said, and she wouldn’t be able to return to work without special nursing care for Harper.

Now, McKinney wants to sit down one-on-one with Trump to tell him it's unrealistic to tell families like hers to “make adjustments."

“We had a nest egg. We used that nest egg,” McKinney told ABC News on Friday. “Now, you – the government – is creating another traumatic event for us … There are a lot of people who can’t just make it work.”

Some 800,000 federal workers are impacted by the partial shutdown with about half of those workers still required to work without pay.

By Saturday, the funding lapse will become the longest on record at 22 days, as Congress and Trump remain at an impasse over Trump's insistence that the U.S. build a border wall.

One major union, the American Federation of Government Employees, estimated that about a third of the 800,000 impacted workers will miss their first paycheck on Friday. Another third will experience a missed paycheck on Monday because of the shutdown, and the remaining third will turn up empty on Tuesday.

Tony Reardon, head of the National Treasury Employees Union, which represents many IRS and U.S. Customs and Border Protection workers, called Friday an "ominous day" because it's the day the shutdown finally hits home for many Americans.

"Federal employees started this shutdown nervous and anxious about their future," he said. "Today, many of them will be downright terrified about whether they can make their car payment, their mortgage, their daycare bill or their children's tuition bills."

Hundreds of federal workers across the country on Thursday organized demonstrations against the shutdown. Rallies were held in Washington, D.C., Detroit, Dallas, and Ogden, Utah.

In past shutdowns, federal workers typically received back pay after the government resumed operating, but an unknown number of contractors are unlikely to receive compensation.

One union that represents security guards and custodians, SEIU 32BJ, said it estimates some 600 of its members who work in the nation's capital as contractors will go without their first paychecks today — paychecks that most of those employees can't afford to miss.

So far, the Trump administration has tried to blunt the impact on the general public by promising to maintain food assistance through February and bringing back IRS personnel to process tax refunds.

But the longer the shutdown lasts, the more federal agencies will be operating in unknown territory.

Rachford told ABC affiliate WCPO-tv in Cincinnati that he voted for Trump in 2016 but said the shutdown and other recent events have made him regret that decision.

Meanwhile, McKinney said she is hoping Trump will hear her story and be willing to rethink his demands for the border wall if it means keeping the government shutdown any longer.

“He’s a father, you would think he would have some soft spot, somewhere deep down,” she said. “He lacks so much empathy, it seems. I know it won’t change anything, but, I want him to see how it’s hurting us.”