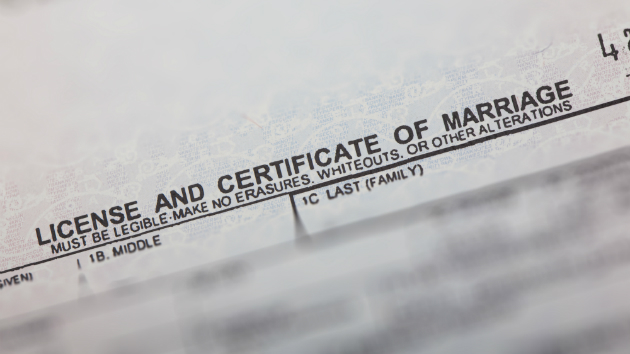 LPETTET/iStock(WASHINGTON) — Love is back in the air as Washington Mayor Muriel Bowser is set to sign a bill Friday afternoon that will reopen the District's marriage bureau.
Once signed, the Let Our Vows Endure Emergency Act of 2019, or LOVE Act, will grant Bowser the authority to issue marriage licenses for 90 days while the federal government remains partially shutdown.
The City Council on Tuesday voted unanimously to approve the bill, which was drafted by Bowser's office soon after she was sworn into office for her second term.
“Just like the Grinch can’t steal Christmas, the shutdown can’t stop love,” John Falcicchio, Bowser’s chief of staff, said in a statement at the time.
It was not immediately clear whether the marriage bureau would reopen immediately on Friday after the bill signing or on Monday, the next business day.
Though some functions of the federally funded D.C. Superior Court remain operational, the Marriage Bureau, which is a part of the D.C. court system, was deemed nonessential and halted its operations when the federal government shut down.
Those wishing to learn more about how to obtain a D.C. marriage license from the Superior Court's website were greeted with a bold red notice that said, “The Committee on Admissions, Marriage Bureau, Library, and Child Care Center are closed during the government shutdown.”
Dan Pollock took to Twitter to blame President Donald Trump for postponing his wedding.
"Thanks to you, the DC marriage bureau is furloughed the week of our wedding!" he wrote.
Sen. Richard Blumenthal, D-Conn., was one of many who responded to Pollock's post on Twitter, wishing them luck and pointing out that he knows them. He included a link to a story in Buzzfeed, which explained that Pollock lives in New York City, but used to work for the senator.
"Like rain on your wedding day, maybe shutdowns are good luck," he wrote on Twitter. "Sure hope so, because this beautiful couple really deserves it! Each is a caring, loyal, whip-smart, dedicated, magnificent person — as I can personally attest. Much happiness!"

Like rain on your wedding day, maybe shutdowns are good luck. Sure hope so, because this beautiful couple really deserves it! Each is a caring, loyal, whip-smart, dedicated, magnificent person—as I can personally attest. Much happiness!https://t.co/KTrRdObVNc