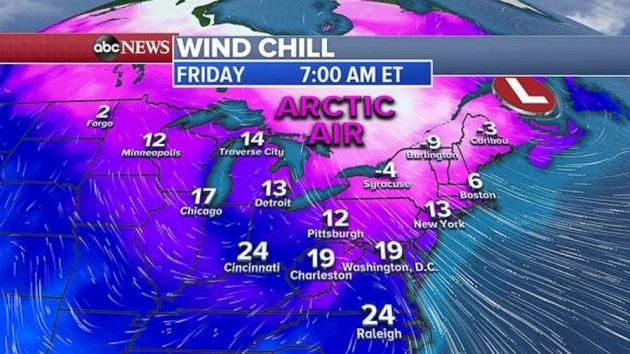 ABC News(NEW YORK) — Wind chills in the Northeast are in the teens and single digits on Friday morning, while a new winter storm could dump several inches of snow on the central U.S. and mid-Atlantic over the weekend.
Although there will be some relief from the cold on Saturday, it will still be quite cold across the Northeast. Wind chills will be near zero for Boston and Albany, New York, and below zero for the interior Northeast.
A major winter storm is developing Friday in the central U.S., which will bring impacts from the Midwest to the East Coast through this weekend. Some rain and snow are moving into New Mexico and Colorado on Friday morning. Additionally, some mixed precipitation and snow are moving into Arkansas and Missouri.
Winter weather alerts have been issued for nearly 40 million Americans from Colorado to Maryland, including Kansas City, Missouri; St. Louis; Indianapolis; and Roanoke, Virginia. Some of the suburbs of Washington, D.C., and Chicago are also under a winter weather alert Friday morning.
Snow will begin to spread later in the day Friday across parts of the Central Plains — from Denver to Wichita, Kansas — and likely mix with a little bit of rain near Kansas City and St. Louis. Locally heavy snow, with rates of 1 to 2 inches per hour, and wind gusts of 20 to 30 mph will be possible.
The snow will briefly intensify across parts of the Midwest as the storm receives some colder air from a different storm sliding in from Canada.
The snow will spread eastward into Illinois, Indiana and parts of Kentucky on Saturday morning. Travel will be dangerous along the I-70 corridor from Kansas City to Indianapolis.
However, as the storm slides east, it meets some drier, colder air and is pushed to the south. Additionally, a new low pressure will develop off the North Carolina coast and begin to draw some of this moisture onto land. On Saturday night, the storm will spread snow into the mid-Atlantic, including Washington, D.C.; Richmond, Virginia; and Roanoke.
Snow might briefly intensify in North Carolina and Virginia on Sunday morning before the storm pulls out to sea.
The bullseye for this storm will be somewhere near the Missouri and Illinois border with 6 inches or more of snowfall through Saturday. A large swatch of 3 to 6 inches of snow is possible from Colorado all the way to Virginia. Snowfall could exceed this estimate in parts of Virginia and Maryland should the storm receive a little bit more moisture from the new coastal low on Sunday.
Rainy weekend for the West Coast
On the West Coast, a particularly wet pattern is setting up again — but this time all the storms will target California. One storm will arrive late Friday, and then another will arrive on Sunday.
By early Monday morning, a third storm quickly moves in right behind the second storm. This pattern will persist through the next week or so.
The result of this rainy pattern will be locally heavy rainfall along the coast of California. As much or more than 6 inches of rain is possible for Southern California through the middle of next week. Additionally, several feet of snow is possible in the Sierra Nevada Mountains.
While some rain in the next couple days isn’t immediately a widespread concern, there is the potential for this to become a concerning story next week.
Copyright © 2019, ABC Radio. All rights reserved.