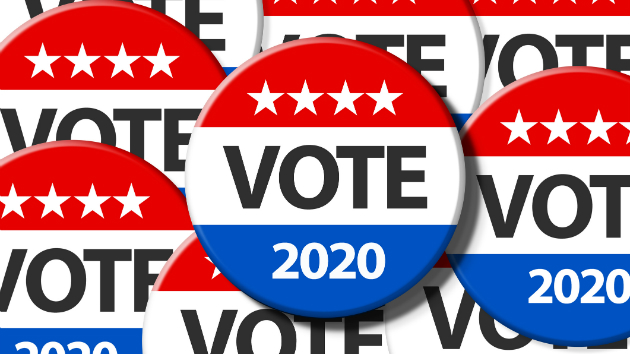 ANNECORDON/iStock(WASHINGTON) — A varied cast of politicians is considering challenging President Donald Trump in 2020 — Democrats and even some Republicans. In our new weekly feature, ABC News and FiveThirtyEight are keeping tabs on the field as it develops.
Each week, we’ll run through what the Oval Office hopefuls are up to — who’s getting closer to officially jumping in the ring and who’s deciding to bow out.
Here's the weekly candidate roundup:
Several potential 2020 hopefuls stepped into the spotlight to criticize Trump's proposed border wall and to call for votes on funding bills that would end the partial government shutdown that is now in its 21st day. Democratic leaders advocated for an end to the impasse as quickly as possible, arguing that the border wall was an expensive and unnecessary solution to an exaggerated problem and one that could be negotiated at a later time without paralyzing the government.
Most of the public, meanwhile, placed responsibility for the shutdown on Trump’s shoulders, according to recent polls, providing fodder for eventual stump speeches.
Jan. 4-10, 2019
Michael Bennet (D)
The Colorado senator changed his Twitter handle from @BennetForCO to @MichaelBennet, renewing speculation that he was interested in seeking higher office. Sources close to Bennet previously told Colorado Public Radio that he was considering a run for president.
Joe Biden (D)
The former vice president is “in the final stages of deciding whether to run for president, The New York Times reported Sunday. Biden, who led some of the first Democratic national and Iowa caucus polls, is “skeptical” that other Democrats considering a run can defeat Trump, according to the newspaper.
Biden's political action committee outraised those of some of his potential rivals, bringing in over $2 million in 2018, Politico reported Tuesday.
Biden’s brother Frank told The Palm Beach Post that he has been encouraging his big brother to run and that he thinks he will. Frank Biden also said that his brother would have won several states that Hillary Clinton lost in 2016, including Pennsylvania. According to Frank Biden, a group of Biden family members there voted for Trump.
Michael Bloomberg (D)
According to a Bloomberg Philanthropies press release, Bloomberg will be in Texas on Friday for announcements in Austin and San Antonio related to his philanthropic "American Cities Climate Challenge." The former mayor of New York City will be joined by the mayors of Austin and San Antonio for meetings and a press conference.
Cory Booker (D)
The New Jersey senator was part of a bipartisan group that announced this week that they would re-introduce legislation to protect special counsel Robert Mueller, who is investigating Russian interference in the 2016 election. The bill seeks to prevent a sudden dismissal of the special counsel by providing for an expedited judicial review of a firing and ensuring that any such decision is made solely for legitimate reasons.
According to CNBC, Booker met recently with Wall Street donors, one of whom said anonymously that "the meetings aren’t officially about running, but of course they are about running in 2020.”
Sherrod Brown (D)
Brown's wife, Connie Schultz, said a decision on a presidential campaign will come “within the next two months,” in an interview with CNN.
The Ohio senator responded to Trump's Tuesday Oval Office address on the government shutdown, saying that the situation at the border was “not a national emergency” but one that Trump created himself.
Julian Castro (D)
On Saturday, Castro will formally announce his decision about a 2020 presidential campaign at an event in San Antonio, where he previously served as mayor.
In an appearance on ABC News' This Week on Sunday, Castro criticized Trump’s leadership and defended Rep. Alexandria Ocasio-Cortez's call for a top marginal tax rate of 70 percent, noting that it was once as high as 90 percent.
On Monday, Castro, who led the Department of Housing and Urban Development during the Obama administration, traveled to Iowa, where he met with Democratic activists and outlined his vision for the future. On Tuesday, he stopped in Nevada to meet with Latino leaders.

John Delaney (D)
Delaney this weekend will open campaign offices in the Iowa cities of Cedar Rapids and Des Moines. After a weekend of traveling through the state, he is scheduled to meet with county-level Democratic officials and deliver a presentation in Davenport on future trends in trade, education, health care and climate change, among other issues.
Jeff Flake (R)
Flake on Monday tweeted a defense of his replacement, Democratic Sen. Kyrsten Sinema, after a national Republican committeeman referred to her as "Senator Madonna" in a Facebook post and said she was elected in part because of "dumb ass people."

No, @kyrstensinema won because she ran a good race and had a message that resonated with Arizona's voters. The sooner we Republicans recognize this, the sooner we will we be in a position to win the next contest. https://t.co/iMNwvMWxKJ

Jay Inslee (D)
On Saturday, the Washington governor will give the keynote address at the annual summit of the Nevada progressive advocacy organization Battle Born Progress.
Inslee signed the “No Fossil Fuel Money Pledge” on Tuesday, promising not to accept donations from the political action committees, executives or groups affiliated with the fossil fuel industry.

“This is just one small statement that they should not continue to have undue influence over our decision-making over the existential threat against our nation,” he told HuffPost.
Inslee and fellow Washington Democrats announced legislation Tuesday that would give state residents a “public option” for health insurance, The Seattle Times reported.
Last Friday, Inslee began to solicit applications for clemency from Washingtonians convicted of marijuana possession misdemeanors in the years before it was its legalized.
Tulsi Gabbard (D)
In a column in The Hill on Tuesday, the Hawaii congresswoman criticized Democrats for “weaponiz[ing] religion” in relation to the November questioning of judicial nominee Brian Buescher, who was asked by the Senate Judiciary Committee about his Catholicism and Knights of Columbus membership.

“While I absolutely believe in the separation of church and state as a necessity to the health of our nation, no American should be asked to renounce his or her faith or membership in a faith-based, service organization in order to hold public office,” wrote Gabbard, who said she nevertheless opposed Buescher's confirmation.
Kirsten Gillibrand (D)
Gillibrand has been reaching out to Wall Street executives to evaluate support for a potential presidential campaign but has been met with divided responses, CNBC reported.
Kamala Harris (D)
Harris released two books on Tuesday: a memoir, The Truths We Hold: An American Journey, and a children's book, Superheroes Are Everywhere.
In interviews with ABC News' Good Morning America and The View, Harris said that she was not ready to announce whether she’d decided to enter the presidential contest but said that she thought the country was “absolutely” ready for a female president of color.

The California senator criticized Trump over the shutdown, labeling his proposed border wall a “vanity project.”
John Kasich (R)
In response to Trump's Oval Office address on the shutdown, Kasich issued a statement criticizing the president for not “putting the country ahead of his politics and being more flexible with his goals.” The former Ohio governor added that “the President and Democrats need to learn how to compromise and put the American people first.”
Amy Klobuchar (D)
The Minnesota senator made news Wednesday when she tweeted that her attempt to meet with attorney general nominee William Barr was denied because of the government shutdown.

I tried (as did Blumenthal) to get meeting w/AG nominee Barr and was told he couldn’t meet until AFTER the hearing. The reason given? The shutdown. Yet shutdown didn’t stop him from other mtgs. This is a 1st for me w/any nominee as a member of judiciary. #Uncool #BadSign

The impasse appeared to be resolved Thursday morning, however:

Thanks everyone. My meeting is now set for this afternoon with AG nominee Barr. Coffee will be hot. ☕️ https://t.co/jUn2AONuQg

Beto O’Rourke (D)
Beto O'Rourke grew a beard — one (unlike that of his former rival, Texas Sen. Ted Cruz) that received decidedly mixed reviews from the internet after he debuted it during a Facebook Live video on Tuesday.
Facial hair aside, O'Rourke's Facebook Live video featured his thoughts on Trump's proposed border wall. The former Texas congressman said such a barrier “would cost $30 billion and take private property and cause death and suffering as more asylum seekers are pushed to ever more hostile stretches of the U.S.-Mexico border” as he shared views of the border from El Paso.
According to The Wall Street Journal, O'Rourke's aides are plotting a cross-country road trip for the Democrat as he continues to consider a presidential bid. The newspaper reported that such a trip would be made solo, without advisers or press, and avoid Iowa and other early-voting states.
Despite indications that O'Rourke is leaning toward a run, Politico noted that advisers to the former congressman are not returning the calls of prominent Democrats in New Hampshire and Iowa.
Richard Ojeda (D)
Ojeda, who is one of the few officially declared presidential candidates, plans to resign from his West Virginia state Senate seat next week to focus on his campaign.
"I cannot — I will not — allow myself to not be sitting in my seat and leave it empty,” the Democrat told West Virginia Public Broadcasting on Wednesday. “It needs to be filled with somebody who's going to go in here and just going to do their best to help the state.”

Bernie Sanders (D)
Sanders held a press conference Thursday to introduce legislation focused on lowering prescription drug prices — an issue that was at the forefront of his 2016 presidential campaign. The three bills would peg U.S. prescription drug prices to median prices in five other major countries, allow the Health and Human Services secretary to negotiate prices under Medicare Part D, and permit drug imports from abroad.
Politico reported Thursday that a former Sanders presidential campaign adviser made sexually charged comments to another staffer and forcibly kissed her at a gathering after the Democratic National Convention in Philadelphia in 2016. (The accused adviser denied the allegation in a statement to Politico.) The account was the latest in a string of stories alleging sexism and harassment within Sanders’ campaign.
Should Sanders run for president this cycle, his campaign will not be managed by Jeff Weaver, who held the position in 2016. Weaver told CNN that he would likely take the position of senior strategic adviser, a decision that came before the emergence of the allegations against the campaign, according to a CNN source.
Tom Steyer (D)
The billionaire Democratic activist announced Wednesday that he would not run for president “at this time” to instead focus on his effort calling for the impeachment of Trump. Although his words left the door open for a campaign at some point in the future, Steyer said that for now he intends to concentrate on pressuring Democratic leaders like Speaker Nancy Pelosi to launch impeachment proceedings in the House.
Elizabeth Warren (D)
After announcing her presidential exploratory committee last week, Warren spent a busy weekend in Iowa at several organizing events and roundtables. The Massachusetts senator's stump speeches focused on her desire to combat income inequality, making health care more affordable and empowering women.
This weekend, Warren will attend an organizing event in Manchester, New Hampshire, during her first visit to the state since the launch of her exploratory committee.
Copyright © 2019, ABC Radio. All rights reserved.