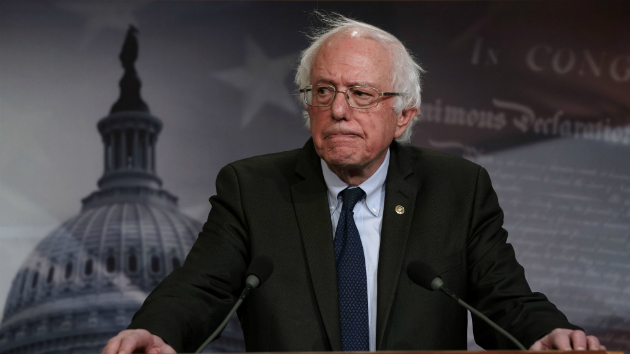 Alex Wong/Getty Images(WASHINGTON) — Vermont Sen. Bernie Sanders apologized Thursday to women who say they were harassed while working on his 2016 presidential campaign.
"The allegations that I have heard, that you have heard, speak to unacceptable behavior that must not be tolerated in any campaign, or in any workplace in our country. To the women in our campaign who were harassed or mistreated, I apologize," Sanders said during a news conference on Capitol Hill. "Our standards, our procedures, out safeguards were clearly inadequate."
Sanders, who said his 2018 re-election campaign to the U.S. Senate enacted more stringent and efficient policies to deal with sexual harassment, added that there needs to be a "cultural revolution" in America to fundamentally change the way women are treated in the workplace.
"Every woman in this country who goes to work today or tomorrow has the right to make sure that she is working in an environment that is free of harassment, which is safe and which is comfortable. And I will do my best to make that happen," Sanders said.

To the women on my 2016 campaign who were harassed or mistreated, thank you, from the bottom of my heart, for speaking out. I apologize.
We can't just talk about ending sexism and discrimination. It must be a reality in our daily lives. That was clearly not the case in 2016. pic.twitter.com/eJtCAGjHZu

The apology comes a day after Politico published a story on allegations of sexual harassment made by a female staffer against Robert Becker, the man who oversaw Sanders' Iowa campaign operation.
Becker has denied the allegations against him, telling Politico: "I categorically deny these allegations of improper and unprofessional conduct," saying the alleged assault is "at odds with my recollection of a late evening filled with many hugs and kisses and tears and conversations about what’s next."
The New York Times also reported earlier this month on the allegations of sexism from female staffers that worked on the Senator's 2016 campaign against former Secretary of State Hillary Clinton.
Sanders again Thursday denied knowledge of the alleged harassment, but top officials from his campaign have acknowledged that the gender make-up of any future campaign would need to look sufficiently different to address systemic sexism.
"Speaking generally about 2016, was it too male? Yes. Was it too white? Yes," former Sanders campaign manager Jeff Weaver said in a statement after the allegations surfaced.
"Would this be a priority to remedy on any future campaign? Definitely, and we share deeply in the urgency to make the necessary changes. In 2016, as the size of our campaign exploded we made efforts to make it a positive experience for people. That there was a failure pains me very much," Weaver added.
Sanders staffers have been actively discussing the need for significant differences in the gender makeup in the leadership of any future presidential campaign.
Part of those changes include Weaver not returning to his role as campaign manager in any future Sanders presidential bid.
Sanders himself has not yet made a decision on whether or not he will run for president in 2020, but released an e-mail late last year with the subject line "If I Run."
"Whenever I am asked about running for president in 2020, I answer that if I am the best candidate to beat Donald Trump, then I will probably run. That is the truth," Sanders wrote in the fundraising pitch.
Copyright © 2019, ABC Radio. All rights reserved.