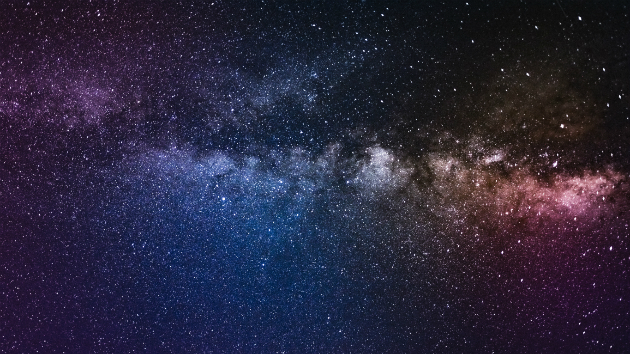 ArisSu/iStock(NEW YORK) — Fast radio bursts are short, millisecond-long radio waves that come from billions of light years outside of the Milky Way galaxy, and for the second time ever, scientists have detected one that has been repeated, suggesting that it's coming from the same location.
The repeating fast radio burst (FRB) was one of 13 FRBs to be detected by the Canadian Hydrogen Intensity Mapping Experiment's (CHIME), a radio telescope in British Columbia’s Okanagan Valley, during its pre-commissioning run in the summer of 2018.
Although the total number of FRBs scientists have detected is over 60 so far, this is only the second time an FRB has been repeated — the first time being in Puerto Rico in 2015, when the Arecibo radio telescope picked up the burst.
“Until now, there was only one known repeating FRB. Knowing that there is another suggests that there could be more out there,” said Ingrid Stairs, an astrophysicist at the University of British Columbia and member of the team, in a statement. “And with more repeaters and more sources available for study, we may be able to understand these cosmic puzzles — where they’re from and what causes them.”
Though their source might be an advanced extraterrestrial civilization, most astronomers right now believe FRBs are produced by something related to magnetic fields and neutron stars, Ziggy Pleunis, a Ph.D. student at McGill University who worked on the CHIME/FRB team, told ABC News.
"Extraordinary claims beg for extraordinary evidence, so for now, a simpler explanation based on known physical processes is preferred by most scientists," Pleunis said.
What they do know is that the "frequency of the radio waves helps us to figure out what produces the bursts and how the environment of the bursts look like," Pleunis said, adding that the frequency relates to the intensity of the light that's being emitted from the source and the size of its magnetic field.
Another clue is that of the 13 FRBs detected by CHIME, the majority of them showed signs of scattering, which is caused by the "different rays of light from the fast radio burst taking a slightly different path because of some material in-between the fast radio burst and the telescope," Pleunis said.
That could mean they're coming from "some sort of dense clump like a supernova remnant, or near the central black hole in a galaxy," said Cherry Ng, an astronomer at the University of Toronto who also worked on the project, in a press release.
Before CHIME, the majority of FRBs detected had been found at frequencies close to 1,400 megahertz. However, the new telescope allows scientists to pick up lower frequencies at a range of 400 to 800 megahertz, potentially increasing their chances of finding more repeated FRBs in the future.
Stairs said that their next steps will be to gain a better understanding of the FRBs' environments and what causes them.
“The findings are just the beginning of CHIME’s discoveries,” Stairs said in an article published by the University of British Columbia. “In the next phase, we plan to capture the full high-resolution data stream from the brightest bursts, which will let us better understand their positions, characteristics and magnetic environments. The next few years will be very exciting.”
The CHIME/FRB project is a combined effort between scientists from the Perimeter Institute for Theoretical Physics, the National Research Council of Canada, the University of British Columbia, McGill University and the University of Toronto.
Copyright © 2019, ABC Radio. All rights reserved.