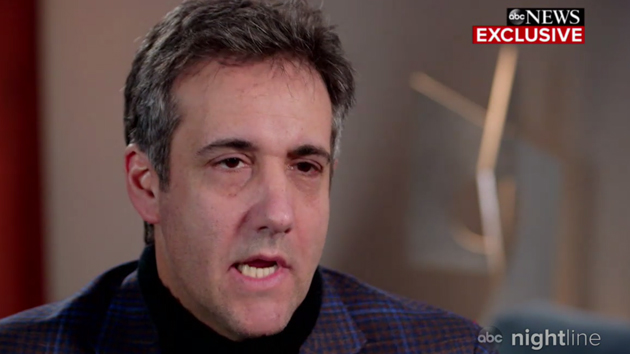 ABCNews.com(WASHINGTON) — Michael Cohen, President Donald Trump’s former personal attorney and fixer, has accepted an invitation to testify in an open session before Congress next month.
“I look forward to having the privilege of being afforded a platform with which to give a full and credible account of the events which have transpired,” Cohen said in a statement to ABC News, adding that he accepted the invitation “in furtherance of my commitment to cooperate and provide the American people with answers.”
The hearing, set for Feb. 7 before the House Committee on Oversight and Reform, was announced Thursday afternoon by Rep. Elijah Cummings, a Maryland Democrat, who is the new chairman of the committee.
In a press release, Cummings said, “I thank Michael Cohen for agreeing to testify before the Oversight Committee voluntarily. I want to make clear that we have no interest in inappropriately interfering with any ongoing criminal investigations, and to that end, we are in the process of consulting with Special Counsel Mueller’s office. The Committee will announce additional information in the coming weeks.”
Cohen was sentenced in December to three years in federal prison for financial crimes, lying to Congress, and for two violations of campaign finance law in connection with hush money payments to two women who have claimed past affairs with Trump. He is due to report to prison in early March.
In an exclusive interview after his sentencing with ABC News’ Chief Anchor George Stephanopoulos, Cohen slammed his former boss as incapable of telling the truth and faulted his own “blind loyalty” to the president for his role in the payments to the women.
Cohen told Stephanopoulos that Trump directed him to arrange the payments to Stormy Daniels and Karen McDougal because then-candidate Trump “was very concerned about how this would affect the election” if their allegations of affairs became public before voters cast their ballots.
Federal prosecutors in the Southern District of New York have implicated, but not charged, the president in the deals reached in the closing weeks of the 2016 election, alleging in court filings that Cohen acted “in coordination with and at the direction of” Trump.
Prosecutors also reached a non-prosecution agreement with American Media Inc., the publisher of the National Enquirer, in which the tabloid admitted to making a $150,000 payment to McDougal “in concert” with the Trump campaign. Under federal law, it is illegal for corporations to make expenditures to influence an election in coordination with or at the request of a candidate or campaign.
The president has denied the affairs but has deployed shifting explanations about when he learned about the payments to the women. He has also contended that the deals were private and unrelated to the campaign, insisting that if anything illegal occurred, it was Cohen’s responsibility.
Trump lashed out at Cohen after his sentencing last month, tweeting that his former close confidant only agreed to plead guilty “in order to embarrass the president and get a much reduced prison sentence, which he did.”
In the interview with Stephanopoulos, however, Cohen rejected Trump’s claims as “absolutely not true. I did not do it to embarrass the president,” he said.
The president, “knows the truth,” Cohen said. “I know the truth, others know the truth, and here is the truth: The people of the United States of America, people of the world, don't believe what he is saying. The man doesn't tell the truth. And it is sad that I should take responsibility for his dirty deeds.”
Since his indictment in August, Cohen has also sat for multiple interviews, totaling about 70 hours, with investigators from the office of Special Counsel Robert Mueller amid his ongoing probe of Russian interference in the 2016 election, according to several people familiar with the discussions.
In a plea deal reached with Mueller’s office, Cohen admitted that he made the misstatements about the “Moscow Project” – the Trump Organization’s efforts to “pursue a branded property in Moscow” in an August 2017 letter to the House and Senate Intelligence Committees, each of which were conducting inquiries into Russian interference, according to court records.
When entering his guilty plea in court, Cohen told the judge he made the false statements “to be consistent with Individual 1’s political messaging and to be loyal to Individual 1.” Based on the description in the court documents, Individual 1 appears to be President Trump.
The special counsel’s questioning of Cohen, one of the president’s closest associates over the past decade, has since focused primarily on all aspects of Trump's dealings with Russia – business and otherwise – sources familiar with the matter told ABC News, as well as whether Trump or any of his associates discussed with Cohen the possibility of a pardon.
Given Cohen’s prolonged time spent in proximity to Trump, his family and the Trump Organization, some insiders consider his cooperation with authorities to be one of most serious potential legal threats to confront the president.