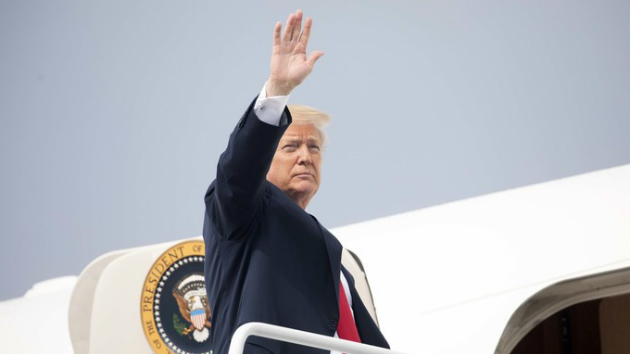 Official White House Photos by Joyce N. Boghosian(WASHINGTON) — President Donald Trump arrived in McAllen, Texas, on Thursday to tour part of the southern border and meet with border patrol agents as he continued to make a case for a wall to stop illegal immigration.
His trip came on the Day 20 of a partial government shutdown triggered by the president's demand that Congress pay for a wall, which Democrats refuse to do.
During a roundtable discussion at the border patrol station in McAllen, the president again contended – falsely — that he never said Mexico was going to provide a direct payment for a border wall and attempted to gloss over his past comments to the contrary by arguing he simply intended for the wall to be paid for through the revised NAFTA agreement.
“When I say Mexico is going to pay for the wall, that’s what I said, I didn’t say they are going to write me a check,” Trump said. “I didn’t mean please write me a check, I mean very simply, they are paying for it in the trade deal.”
The president again blasted Democrats, claiming falsely that “Democrats will not fund border security plain and simple” and said their position of "no barrier, no wall is indefensible.”
As he left Thursday morning to head to the border, Trump said he "probably … I would almost say definitely" declare a national emergency to get funding for a border wall if he can't reach a deal with congressional Democrats. "I would say 100 percent," the president continued. "I don't want to say 100 percent because maybe something else comes up."
While Trump said he'd rather make a deal, he again lashed out at Democrats on Day 20 of the government shutdown over the impasse, denied that he pounded on the Situation Room table and said he didn't "rant or rave" at the latest round of White House talks Wednesday before walking out. "I didn't raise my voice. That was a lie," Trump said.
"I don't have temper tantrums," the president said, pushing back on how Senate Minority Leader Chuck Schumer had characterized how Trump had acted when House Speaker Nancy Pelosi had again told him "no" when he asked whether Democrats would agree to wall funding if he re-opened the government.
The president also said China was more "honorable" in negotiations than the Democrats.
"We're negotiating and having tremendous success with China, and I find China, frankly, in many ways, to be far more honorable than Cryin' Chuck and Nancy. China is actually much easier to deal with than the opposition party," Trump said.
Later Thursday, the president tweeted that he had canceled his trip to Davos, Switzerland, 11 days ahead, for the World Economic forum, blaming the shutdown — and Democrats.

The White House has said the president's trip to Texas, part of his PR blitz for a border wall, is designed to allow him to meet with those individuals who are "on the front lines" of what they have called a "national security and humanitarian crisis."
The president was scheduled to meet with border patrol agents at the U.S. Border Patrol McAllen Station and attend a roundtable on border security and immigration. He will then make his way to the Rio Grande, the winding river separating the U.S. and Mexico. Thursday's trip is his first visit to the border in Texas.

Whether the president has the legal authority to build a wall through a national emergency declaration — in which he would circumvent Congress to get military funding for the project– was under review by White House lawyers, but Trump said he had the power to do so.
"The lawyers have so advised me," Trump said. "I'm not prepared to do that yet, but if I have to, I will. I have no doubt about it, I will. I have the absolute right to declare," Trump said. Later he added he has a "tremendous" amount of funds available if he chooses that route.
Should the president go forward with the move, it would almost certainly be challenged in court and some congressional Republicans strongly oppose the president using his executive power to secure border funding.
The White House has struggled to make the case that there is, in fact, a crisis at the border, with the number of illegal apprehensions trending downward over the last two decades. But the administration points to an uptick of illegal border crossing apprehensions in recent months as evidence.
On Capitol Hill, House Speaker Nancy Pelosi said the president's proposal "is not the best way to secure our borders."
"Not only was the president unpresidential – surprise, surprise – yesterday in his behavior, I think the meeting was a set up so he could walk out, but I’ll say just that," Pelosi said, recounting the White House meeting. "The fact is is that what the president is proposing is not the best way to protect our borders."