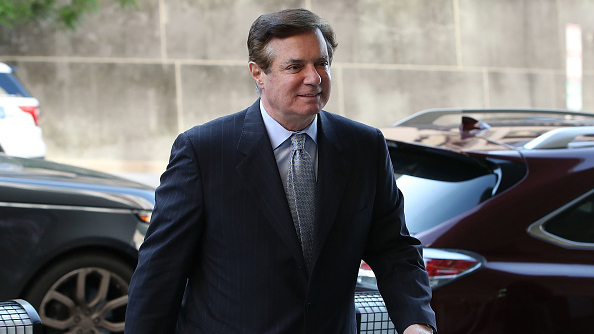 Mark Wilson/Getty Images(WASHINGTON) — President Donald Trump on Thursday claimed he had no knowledge that Paul Manafort, his onetime campaign chairman, allegedly shared internal 2016 Trump campaign polling data with a suspected former Russian intelligence officer.
When asked by ABC News Chief White House Correspondent Jonathan Karl, "Did you know Paul Manafort was sharing polling data from your campaign with the Russians? Trump responded, "No. I didn’t know anything about that."
News of Manafort’s coordination with the Russian, Konstantin Kilimnik, came to light by mistake on Tuesday when his defense team failed to properly redact portions of a court document meant to defend their client from accusations he lied to investigators.
Legal experts told ABC News this week that sharing campaign polling data with a foreign person is not a crime, but could be an important piece to the puzzle concerning possible Trump campaign coordination with Russians during the 2016 campaign – a subject being investigated by special counsel Robert Mueller’s office.
Manafort already faces lengthy prison sentences for charges brought by Mueller’s office in Virginia and Washington, D.C.
A jury convicted Manafort on eight counts of tax and bank-fraud in August during his trial in Alexandria, Virginia. On the eve of a second trial in Washington, D.C., the next month Manafort struck a plea deal with prosecutors. he agreed to fully cooperate with prosecutors and plead guilty to two counts of conspiracy in a separate case in Washington, D.C.
But that plea deal fell apart after prosecutors accused him of lying.
Manafort’s sentencing in Virginia is scheduled for February 8 and in Washington, D.C., on March 5, but the president hasn’t ruled out a pardon for his former campaign chairman.
Trump, asked by the New York Post in November whether he was considering a pardon Manafort, said that he “wouldn’t take it off the table."