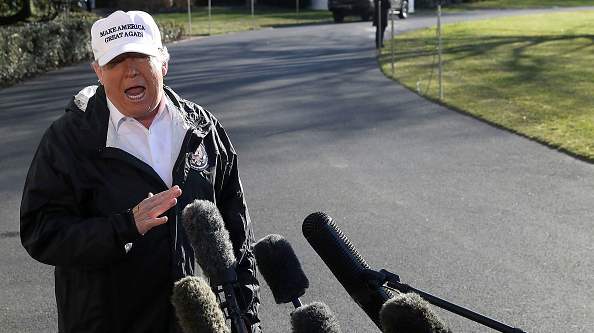 Mark Wilson/Getty Images(WASHINGTON) — President Donald Trump claimed Thursday that while he repeatedly said during his campaign and after gaining the White House that Mexico would pay for his proposed border wall, he "never meant they're going to write out a check."
But in 2016, his campaign's plan for financing the wall called for a one-time payment from Mexico … basically, a check.
In a two-page memo posted on its website , the Trump campaign outlined how he and his administration would compel Mexico to pay for the wall: rewrite financial laws so that "no alien may wire money outside of the United States unless the alien first provides a document establishing his lawful presence in the United States," preventing Mexico from collecting approximately $24 billion in remittances, or ask Mexico to make a one-time payment of $5-10 billion for the wall.
Trump responded to what he called "fake news" reports questioning his claim that Mexico would pay for the wall as he left the White House Thursday on his way to McAllen, Texas, to highlight his push for a border wall amid a now 20-day government shutdown.
"When — during the campaign, I would say, "Mexico is going to pay for it," obviously, I never said this and I never meant they're going to write out a check. I said, "They're going to pay for it." They are," Trump said, going on to repeat his repeatedly debunked claim that Mexico would pay for the wall through the newly-revised NAFTA trade deal, now known as the USMCA agreement, still unapproved by Congress.
"They are paying for it with the incredible deal we made, called the United States, Mexico, and Canada USMCA deal. It's a trade deal. It has to be approved by Congress. It probably will be, other than maybe they even hold that up because they want to have — you know, they want to do as much harm as they can, only because of the 2020 presidential election," he said.
"So, Mexico is paying for the wall indirectly. And when I said Mexico will pay for the wall, in front of thousands and thousands of people, obviously they're not going to write a check. But they are paying for the wall indirectly, many, many times over, by the really great trade deal we just made," the president said.
During the 2016 campaign, President Barack Obama called the idea "half-baked."
“The notion that we’re going to track every Western Union bit of money that’s being sent to Mexico – good luck with that,” Obama said.