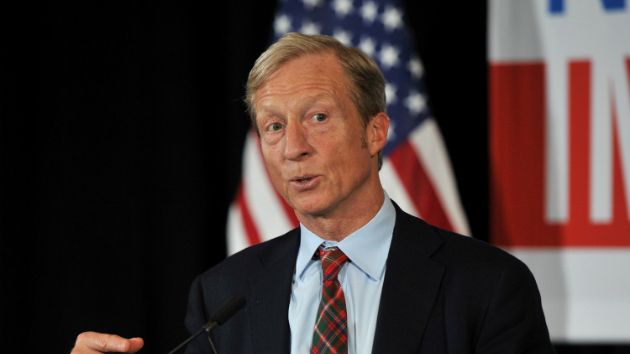 Steve Pope/Getty Images(DES MOINES, Iowa) — Tom Steyer, the billionaire liberal activist who has poured millions into electing progressive candidates in recent years, announced Wednesday that he will not seek the Democratic presidential nomination in 2020. Instead, he says he is redoubling his efforts to impeach President Donald Trump.
"I am not running for president at this time," Steyer said at a press conference in Des Moines, Iowa.
Referring to the outside group he heads that is dedicated to removing the 45th president from office, Steyer said he "will be dedicating 100 percent of my time, effort and resources to one cause: working for Mr. Trump's impeachment and removal from office."
"Most people come to Iowa around this time to announce a campaign for president," Steyer added. "But I am proud to be here to announce that I will do whatever it takes, for as long as it takes, to remove a president."
The move comes as Steyer seemed to be preparing for a White House bid, making several trips to states with early nominating contests in 2020 like Iowa, New Hampshire and South Carolina, and running television ads about impeaching Trump in early primary states.
Steyer, through outside groups like NextGen America and Need to Impeach, spent $120 million during the midterm elections with the goal of electing progressive candidates across the country, turning out young voters and garnering support for Trump's impeachment.
The California billionaire said he will be specifically targeting congressional Democrats like Speaker Nancy Pelosi and New York Rep. Jerrold Nadler, the Chairman of the House Judiciary Committee, to begin impeachment proceedings against Trump.
When asked about the process of actually removing Trump from office, something that would likely be voted on by a Republican-controlled Senate, Steyer said that would come down to pressure on individual GOP senators.
"At some point, Republican senators will ask themselves what their own constituents are demanding. And whether it's better to abandon this disaster of a president or to support him," Steyer said.
Steyer's decision not to seek the White House in 2020 comes just over a week after Sen. Elizabeth Warren, D-Mass., formally announced a presidential exploratory committee, a precursor to a potential 2020 White House bid.
Warren's campaign announced Wednesday that she is traveling to New Hampshire this Saturday for an organizing event in Manchester.