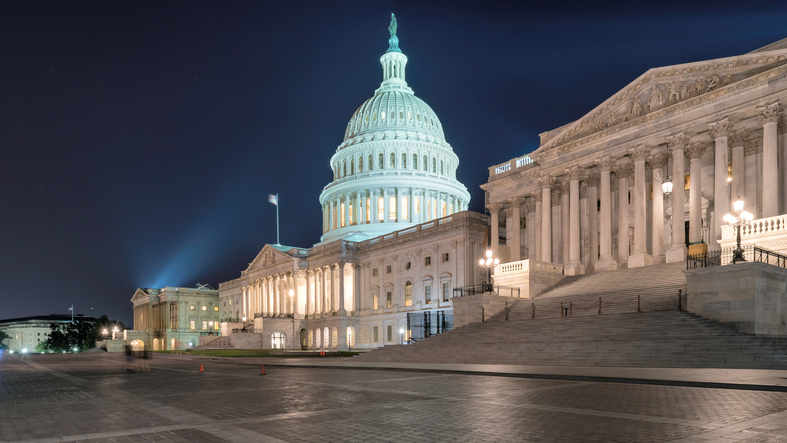 lucky-photographer/iStock(WASHINGTON) — On Thursday, Day 20 of the government shutdown and one day after an explosive White House meeting, senators headed home exasperated after a last-ditch effort to strike a deal to re-open the government fell apart.
GOP Sen. Lindsey Graham – who had been trying to negotiate with a handful of fellow Republicans on some kind of solution that addressed a Democratic demand to extend DACA, the Obama-era program that protects children brought illegally to the U.S. by their parents, simply threw in the towel.
“I see no way forward. I was hopeful last night. Not hopeful today,” Graham, a top Trump ally, said. “I have never been more depressed about moving forward than I am right now. I just don't see a pathway forward. Somebody’s gotta like, get some energy to fix this.”
Just Wednesday, Graham appeared hopeful that he could get Democrats on board with giving the president money for his border wall if he could secure continued protections for DACA recipients.
But after meeting with Senate Republican Leader Mitch McConnell and Vice President Mike Pence Thursday morning, it became clear his plan to woo Democrats was going nowhere.
In a pen and pad session with reporters on Capitol Hill, Pence said Trump's preference is to allow the Supreme Court to rule whether President Donald Trump's order in September 2017 to rescind DACA was constitutional before addressing the legal status of recipients, suggesting – until Trump says otherwise – that they want to keep this debate focused on border security.
"We feel confident that the Supreme Court will find DACA to be unconstitutional," Pence said.
Sen. Mike Rounds, a South Dakota Republican, when asked by ABC if the shutdown is heading into next week, replied, “Unfortunately, yes.”
“Unfortunately, this is a binary issue that those two individuals have to come to an agreement on,” Rounds said, referring to Trump and House Speaker Nancy Pelosi.
"There should never be a government shutdown. It should be off limits in our discussion," Republican Sen. Lamar Alexander said. "I've recommended that we find provisions for border security that we voted for before and enact them, and re-open the government."
Earlier Thursday, Senate Democrats, led by Minority Leader Chuck Schumer, attempted to ask for unanimous consent to hold votes that would re-open the government.
The Democrats wanted votes on measures passed in the House last week.
McConnell rejected the effort immediately, calling it "pointless, absolutely pointless."
As he left Thursday morning to head to the border, Trump said he "probably … I would almost say definitely" declare a national emergency to get funding for a border wall if he can't reach a deal with congressional Democrats.
"I would say 100 percent," the president continued. "I don't want to say 100 percent because maybe something else comes up."
Should the president go forward with the move, it would almost certainly be challenged in court and some congressional Republicans strongly oppose the president using his executive power to secure border funding.
"At the end of the day, I don't know if this bears fruits statutorily. I’m a pretty hawkish guy on powers of the commander in chief," Graham said.
Late Thursday, the Senate passed a measure that would guarantee back-pay for federal employees affected by the government shutdown.
"I had an opportunity to talk to President Trump a moment ago and wanted to indicate to our colleagues that he will sign the bill that we've been discussing here to guarantee that government workers displaced as a result of the shut down will ultimately be compensated," McConnell said on the Senate floor.