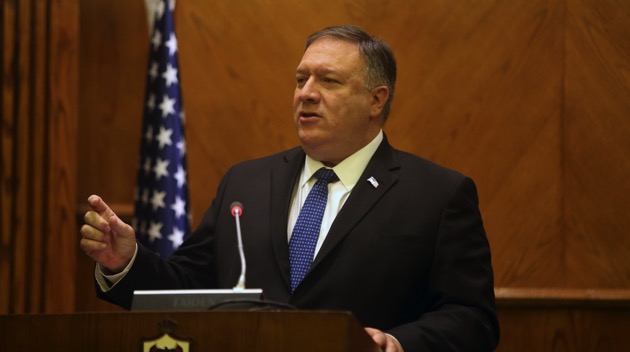 Jordan Pix/Getty Images(CAIRO, Egypt) — Secretary of State Mike Pompeo defended the U.S. withdrawal from Syria and issued a strong rebuke of the Obama administration's Middle East strategy, during a major foreign policy address in Egypt on Thursday.
While the secretary challenged Middle Eastern countries to take on new responsibilities in the fight against extremism, he failed to call out human rights abuses in places like Egypt and Saudi Arabia and did not mention the murder of Washington Post journalist Jamal Khashoggi.
During his speech at the American University in Cairo, Pompeo declared that "American will not retreat until the terror fight is over," but acknowledged that President Donald Trump "has made the decision to bring our troops home from Syria."
"We always do and now is the time. But this isn’t a change of mission," he said. "We remain committed to the complete dismantling of the ISIS threat and the ongoing fight against radical Islamism in all of its forms."
Pompeo's address came one day after his surprise visit to Iraq and in the midst of a whirlwind tour of the Middle East in which he is reassuring partners of America's presence in the region following Trump's decision three weeks ago to withdrawal 2,000 U.S. troops from Syria.
What was originally a 30-day timeline for withdrawal gradually grew to several months, but now Pompeo and National Security Adviser John Bolton are stating that any withdrawal is "conditions-based," including the enduring defeat of ISIS, protection for America's Kurdish partners, and the assurance that Iran will not increase its influence in the region.
Speaking to reporters before his speech on Thursday, Pompeo said that any contradiction in the administration’s Syria policy has been “made up” by the media.
The secretary began his address in Cairo by blasting the Obama administration for "falsely seeing ourselves as a force for what ails the Middle East."
"So today what did we learn from all of this? We learned that when America retreats, chaos follows. When we neglect our friends, resentment builds. And when we partner with our enemies, they advance," he said. "The good news is this: The age of self-inflicted American shame is over, and so are the policies that produced so much needless suffering. Now comes the real 'new beginning.'"
In a statement, the National Security Action Group – an advocacy organization made up of former Obama administration officials – responded to Pompeo's criticism, writing: “That this administration feels the need, nearly a decade later, to take potshots at an effort to identify common ground between the Arab world and the West speaks not only to the Trump administration’s pettiness but also to its lack of a strategic vision for America’s role in the region and its abdication of America’s values."
Pompeo also praised the Trump administration's decision to leave the Iran nuclear deal, saying "we will not ease our campaign to stop Iran's malevolent influence and actions against this region and the world."
That includes Syria, where Iran has had a growing role in supporting the Syrian regime.
Pompeo downplayed the idea that the withdrawal of U.S. forces from Syria would give Iran the upper hand there, saying that, "In Syria, the United States will use diplomacy and work with our partners to expel every last Iranian boot, and work through the [United Nations]-led process to bring peace and stability to the long-suffering Syrian people."
Iran's Foreign Minister Mohammad Javad Zarif responded on Twitter, saying, "Whenever/wherever US interferes, chaos, repression and resentment follow. The day Iran mimics US clients and Secretary Pompeo's 'human rights models' — be it the Shah or current butchers — to become a 'normal' country is the day hell freezes over. Best for the US to just get over loss of Iran."
Pompeo declined to call out human rights abuses happening Egypt, including the reported detention and torture of American-Egyptian Khaled Hassan who has been missing since last January — allegations Cairo denies.
During his address, the secretary applauded Egyptian President Abdel Fattah al-Sisi's efforts to promote religious freedom and encouraged him "to unleash the creative energies of Egypt’s people, unfetter the economy, and promote a free and open exchange of ideas."
The State Department did say that the issue of human rights was brought up in Pompeo's private meeting with Sisi earlier in the day.
Also noticeably absent from Thursday's address was the mention of Washington Post journalist Jamal Khashoggi, brutally murdered at the Saudi consulate in Istanbul in October.
The killing led the U.S. Senate to vote to suspend U.S. support to the Saudi-led coalition fighting in Yemen, as well as condemn Crown Prince Mohammed bin Salman for the act. While the Trump administration has sanctioned Saudi officials for their alleged role in the murder, Trump has continued to defend Saudi leadership.
With stops already in Jordan, Iraq, and Egypt, Pompeo will continue his tour of the Middle East on Friday with planned visits to Bahrain, the United Arab Emirates, Qatar, Saudi Arabia, Oman, and Kuwait.
Copyright © 2019, ABC Radio. All rights reserved.