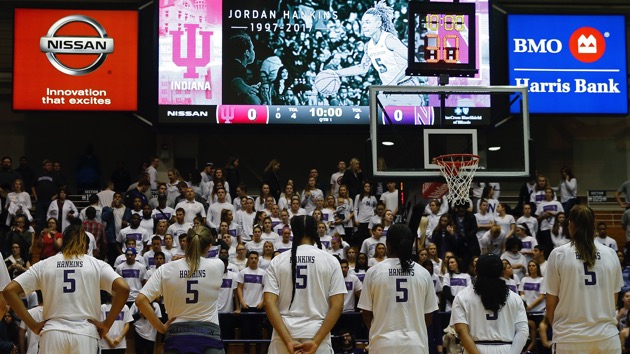 Jim Young/Chicago Tribune/TNS via Getty Images(EVANSTON, Ill.) — The mother of a college basketball player who committed suicide is now suing one of the school's sororities, saying that alleged hazing contributed to her daughter's depression.
Jordan Hankins was a 19-year-old sophomore at Northwestern University when she was found dead in her dorm room in January 2017.
Her mother, Felicia Hankins, is suing Alpha Kappa Alpha and two of their chapters — Gamma Chi, which is an undergraduate chapter, and Delta Chi Omega, which is the graduate chapter, both at Northwestern — as well as nine individuals who are in the leadership of those chapters or now-former students who were in the chapters at the time of Jordan Hankins' death.
The lawsuit does not go into detailed explanations of the alleged abuse but claims Jordan Hankins was "subjected to hazing, including physical and mental harm."
"While post-initiation pledging, Jordan Hankins was subjected to physical abuse including paddling, verbal abuse, mental abuse, financial exploitation, sleep deprivation, items being thrown and dumped on her, and other forms of hazing intended to humiliate and demean her," the suit states.
Alpha Kappa Alpha was suspended from Northwestern's campus in May 2017, but specific details about the reason for the suspension were not disclosed. It may be allowed to return to campus in the fall, but it "must meet several criteria for that to happen," a Northwestern spokesperson told ABC News.
Northwestern is not named as a party in the lawsuit, but a school spokesperson confirmed in a statement that the sorority "has been and continues to be suspended from the University."
"Northwestern remains deeply saddened by the death of Jordan Hankins two years ago, and we continue to send our kindest thoughts and condolences to her friends and family," the spokesman's statement said, before acknowledging the suit and noting they will not be commenting further because the matter is in litigation.
ABC News' requests for comment from Alpha Kappa Alpha were not immediately returned.
Felicia Hankins' attorney Brand Vaughn released a statement on the family's behalf, calling it "critical" to hold the sorority and those responsible "accountable."
"Jordan Hankins was at the prime of her life and seeking to join an organization she believed was dedicated to sisterhood and personal and professional development. Instead, as a condition of her membership, it is alleged she was subjected to severe physical and mental abuse by members of Alpha Kappa Alpha Sorority," the statement reads. "Despite repeated warnings that the hazing was triggering Hankins’ anxiety and depression, we allege that AKA failed to take action to stop the abuse, resulting in Hankins taking her own life."
The suit states that “Jordan Hankins communicated to members of AKA sorority, including individually named defendants, that the hazing was triggering her PTSD, causing severe anxiety and depression and that she was having suicidal thoughts.”
Copyright © 2019, ABC Radio. All rights reserved.