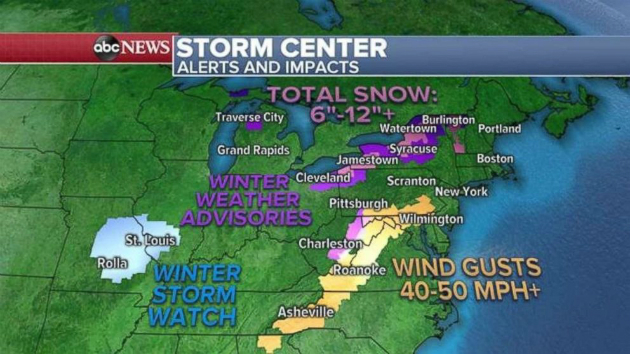 ABC News(NEW YORK) — At least 7 inches of lake-effect snow had been reported in western New York as of early Thursday morning, with squalls coming off the Great Lakes and occasionally pushing snowfall rates to 1 to 2 inches per hour in northwest Pennsylvania and upstate New York.
Additionally, wind gusts nearing 40 mph are causing near whiteout conditions on roadways affected by the snow squalls. This comes after a quick-moving storm dumped 7 to 8 inches of snow on Vermont and New Hampshire on Wednesday.
In parts of New York state on Thursday, snow accumulations could exceed 1 foot. As the winter storm pulls away farther into Southeast Canada, lake-effect snow squalls should end later Thursday.
Meanwhile, gusty winds are still an issue along the Appalachian Mountains and are extending into parts of the Washington, D.C., and Philadelphia metro areas. Wind gusts approaching 50 mph were reported on the New Jersey shore on Wednesday and others near 60 mph were reported in western North Carolina.
New winter storm watches have been issued Thursday for parts of the Midwest as a new storm is forecast to develop on Friday.
This storm already is pulling down an Arctic blast into parts of the Midwest Thursday morning, with single-digit wind chills greeting those waking up from Minneapolis to Chicago. This Arctic air will make its way into the Northeast on Friday, with wind chills across the entire region in the single digits and teens.
The wind chill in New York City will be about 13 degrees Friday morning.
There's increasing confidence that a new winter storm will develop on Friday morning in the southern high Plains, bringing snow to parts of Colorado and northern New Mexico.
On Friday and into Saturday, this storm will organize a bit more, boosted by a separate system from the north, potentially adding to snowfalls in the central Plains and along the Interstate 70 corridor from Kansas City to Indianapolis. Snow may just reach Chicago, with heavier snow seen in central Illinois and northern Missouri. The storm should slide into the Ohio and Mississippi river valleys on Saturday night.
Forecasters have more confidence in what the storm does this weekend on the East Coast, however some aspects of this weather event remain unclear. On Sunday and Monday, the storm likely will become a little more energized and organized again as it moves towards the coast line near Virginia and North Carolina.
However, a high pressure sitting in southern Canada should suppress the storm from making too much northern movement. The result of this is a snow shield wrapping around the cold side of the storm that likely brings impacts to parts of the mid Atlantic.
There's increasing potential for accumulating snowfall in the mid-Atlantic for the second half of the weekend and into early Monday. However, there's still potential for the heaviest snow bands to slide a little north or be suppressed a little south. So it's still too early to pinpoint where the heaviest snowfall will set up. Additionally, it seems the snow wouldn't be particularly intense.
It's still too early to tell. There's no sufficient evidence, despite reports on social media, to suggest a blockbuster winter weather event is in the offing.
Copyright © 2019, ABC Radio. All rights reserved.