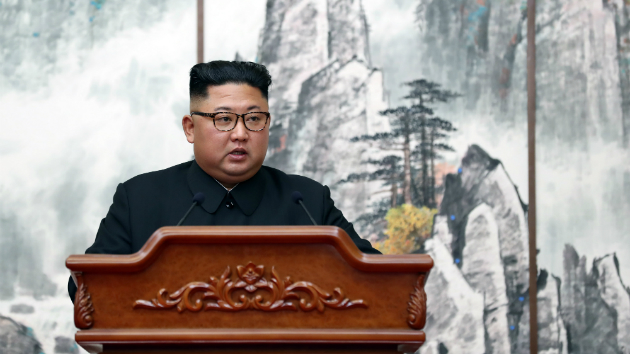 Pyeongyang Press Corps/Pool/Getty Images(BEIJING) — North Korean leader Kim Jong Un has the support of Chinese President Xi Jinping for an expected second summit with U.S. President Donald Trump.
According to the official readout by China's Xinhua News Agency of Kim and Xi's meeting this week in Beijing, Xi "supported [North Korea] and the United States holding summits and achieving results."
While the exact details of the discussion were not revealed, Xi is quoted by Xinhua as saying, "China hopes that the DPRK and the United States will meet each other halfway" and that "China stands ready to work with the DPRK and relevant parties to play a positive and constructive role in maintaining peace and stability and realizing denuclearization on the peninsula and lasting peace and stability in the region."
Many observers, including China's nationalistic newspaper Global Times, felt the timing of Kim's trip, on Xi's invitation, was intentional. As Kim's armored train pulled into Beijing Railway Station on Tuesday, a few blocks away a U.S. trade delegation was hammering out differences with their Chinese counterparts in an effort to end the trade war between the two countries. The two sides have a truce that expires March 1.
Kim "came to Beijing at a critical juncture, when the ongoing Sino-US trade negotiations were poised to produce a breakthrough and the second summit between him and U.S. President Donald Trump is slated to take place soon," observed an op-ed in the Global Times.
Kim previously met with Xi before and after the Singapore Summit with Trump. However, after the June summit, progress between North Korea and the U.S. stalled over fundamental disagreements on their respective definitions of "denuclearization" and a timeline for said denuclearization.
The Global Times wrote, "The second summit is so important that Kim feels it is necessary to break protocol and consult Chinese leaders before shaking hands with Trump once again."
Despite sanctions, China remains North Korea's main trading partner and benefactor, accounting for 90 percent of the reclusive nation's imports.
Before Kim's first visit to China last March, the relationship between Kim and Xi was anything but warm — they kept each other at arm's length despite years of propaganda claiming the two countries were as close as "lips and teeth."
But since North Korea's rapprochement with South Korea and the U.S., Kim and Xi have thawed their frosty relationship, as each wants to negotiate with Trump on a key topic: Kim on denuclearization and Xi on trade.
Prior to departing Beijing, North Korean state media reported that Kim once again extended an invitation to Xi to visit Pyongyang, which Xi reportedly accepted. Xi also reportedly accepted a previous invitation to visit the North Korean capital last year but has yet to go.
Copyright © 2019, ABC Radio. All rights reserved.