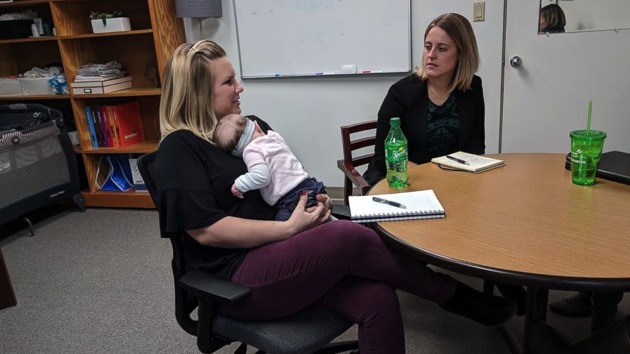 Courtesy Chelsey DeRuyter(NEW YORK) — Moms who work outside the home are in a constant struggle between being present in their careers and being present with their kids.
For the new moms employed by the Girl Scouts of Greater Iowa, that struggle has been far lessened by a new program called "Infants at Work."
The program allows a baby — biological, adopted and fostered — to come with their parent to work for the first 180 days of the baby's life or until the baby starts crawling, Antoinette Bernich, Chief Marketing & Communications Officer of Girl Scouts of Greater Iowa, told Good Morning America.
"Having an infant around has been the coolest thing ever," Bernich said of the program's first baby. Finley has been coming to work with her mom, Chelsey DeRuyter, for the last four weeks.
"It’s been an amazing experience," DeRuyter, the Chief Development Officer of Girl Scouts of Greater Iowa, told "GMA." "At first I was nervous about how I would juggle my responsibilities and role. How was I going to juggle both daughter and being successful at my job? But I've been able to be very productive."
On Thursday, Finley will attend a meeting about membership processes with eight staff in attendance.
"It makes me feel extremely empowered to be both a mom and a person with a successful career. I love being with Finley during these important milestones while being st a job that I love," DeRuyter said.
Over the next few months, four more babies will be born to staff members.
Bernich said "the focus here is still on work. This is an accommodation for working parents to alleviate some stress."
She said this next year will be about learning what works and what doesn't. However, the program as it stands now does have some provisions built in. There's a plan in place for fussiness, she said, as well as a plan if there are some employees who simply do not want to be around babies at work.
"We're going to make this work for everybody," she said.
Copyright © 2019, ABC Radio. All rights reserved.