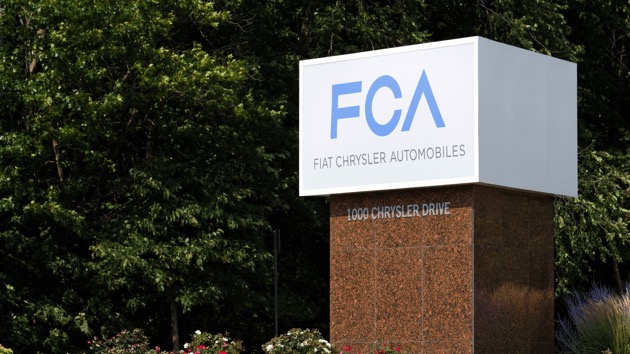 wellesenterprises/iStock(WASHINGTON) — Fiat-Chrysler could pay more than $800 million in fines and settlements, the administration announced Thursday, after allegations that the automaker used illegal software to circumvent laboratory emissions inspections on 100,000 diesel vehicles.
That figure includes $305 million the company will pay to settle the claims filed by the Department of Justice and Environmental Protection Agency and the state of California which alleged that the company cheated on fuel emissions tests. The company will pay $205 million to mitigate the excess pollution and recall the affected vehicles.
On top of those fees, the company could have to pay more than $300 million in settlements for customers in a class action lawsuit. Those payouts are expected to average $2800 for each customer impacted by the recall, according to the company.
EPA and Justice Department officials said Fiat-Chrysler lied to the government after EPA engineers discovered a method of cheating emissions tests among millions of lines of computer code.
"Not only did they violate the law. They also tried to hide their actions. For three years Fiat-Chrysler told us that their vehicles complied with our standards. Yet EPA engineers at our National Vehicle and Fuel Emissions Laboratory and the office of transportation and air quality caught them cheating, and that is no easy feat," he told reporters on Thursday.
Officials said that, similar to the Volkswagen case, the system in Fiat-Chrysler diesel vehicles used to control pollution from the car's emissions operated differently when it was being tested by EPA than when it was operated on the road. Under the Clean Air Act all new vehicle models have to be certified as in compliance with fuel emission standards to be on the market in the U.S., but individual vehicles are not always tested on a regular basis.
The administration says that vehicles like Ram trucks and Grand Cherokee SUV's met emissions standards when they were tested but then released more air pollution on the road, including harmful nitrogen oxides, ozone, and particulate matter that contributes to smog.
"A multinational corporate bad actor, as the administration is saying, seriously violated emissions laws to the detriment of the health and welfare of the people of the United States and that is a very serious offense," Assistant Attorney General Jeff Clark told reporters on Thursday.
The company maintains they did not engage in a deliberate scheme to install defeat devices or cheat emissions tests.
"The settlements do not change the Company’s position that it did not engage in any deliberate scheme to install defeat devices to cheat emissions tests. Further, the consent decree and settlement agreements contain no finding or admission with regard to any alleged violations of vehicle emissions rules," the company said in a press release, adding they hope the settlement helps restore customers' trust.
"We have implemented rigorous new validation procedures and updated our training programs to ensure continued compliance with the increasingly complex regulatory environment," Mark Chernoby, the company’s head of North American Safety and Regulatory Compliance, said in a statement. "Such measures are consistent with our mission to deliver advanced technologies that deliver value to our customers and that enhance the environmental performance of our products."
Officials declined to comment on if or when the administration could pursue criminal charges.
The automaker will recall approximately 100,000 vehicles including model year 2014-2016 Jeep Grand Cherokees and Ram pickup trucks for the software update. The company could face additional fees if 85 percent of those vehicles aren't recalled according to a schedule as part of the settlement.
Scrutiny of U.S. vehicle emissions grew in 2015 when Volkswagen reached a $25 billion settlement with the Department of Justice after admitting to illegally installing software in diesel vehicles that altered its emissions when undergoing tests. The German automaker recalled roughly 500,000 vehicles in the United States and executives were criminally charged by the Department of Justice.
While the action against Fiat-Chrysler impacts fewer vehicles than the earlier case against Volkswagen, officials said the settlement imposes a higher penalty per vehicle in this case.
Susan Bodine, EPA assistant administrator for enforcement, said EPA's vehicle testing lab has increased oversight since the Volkswagen case and expanded emissions testing. She said EPA caught Fiat-Chrysler earlier because of the increased work from EPA engineers.
EPA and DOJ staff involved in the case kept working during the government shutdown to meet a court-imposed deadline that a settlement be reached by Jan. 10.
Copyright © 2019, ABC Radio. All rights reserved.