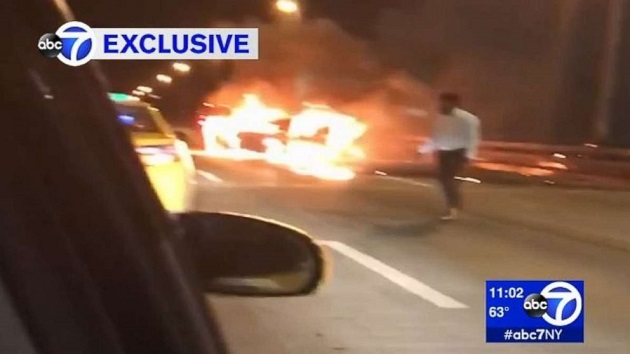 WABC-TV(NEW YORK) — A New York man was sentenced to 12 years in prison on Wednesday after he admitting to leaving the scene of a fiery crash that trapped and killed his friend.
Saeed Ahmad, 24, pleaded guilty to second-degree manslaughter in the October 2017 death of his friend Harleen Grewal, who died after Ahmad abandoned her in a burning vehicle on the Brooklyn-Queens Expressway.
Grewal, 25, was pronounced dead at the scene.
Ahmad allegedly was "driving at an excessive rate of speed" when he attempted to pass another vehicle and crashed into a highway barrier, causing his car to explode and burst into flames, according to prosecutors, who said he hailed a cab and fled without calling 911 or alerting anyone a passenger was in his car.
Ahmad was arrested later that morning and treated for burns to his neck, arms and legs. Tests determined that his blood alcohol level at the time of the crash was above the legal limit of .08, Brooklyn District Attorney Eric Gonzalez said in a statement.
"This defendant's senseless and reckless actions caused the death of a young woman who had her entire life ahead of her," Gonzalez said. "He showed complete disregard for human life and for the safety of everyone using our roadways."
Hopefully, he added, the victim's heartbroken family will "find some solace" in sentencing.
Copyright © 2019, ABC Radio. All rights reserved.

3 dead after car crashes into building in Pittsburgh: Officials
From car crashes to plane delays, cicadas wreaking havoc by the billions
“It’s not the years, it’s the mileage”: ‘Raiders of the Lost Ark’ turns 40 on Saturday
More car buyers looking out of state as inventories trail demand
Video shows woman’s car flip over after officer’s PIT maneuver
‘Blindspotting’: Jasmine Cephas Jones discusses the significance of showing a female POV navigating the prison system