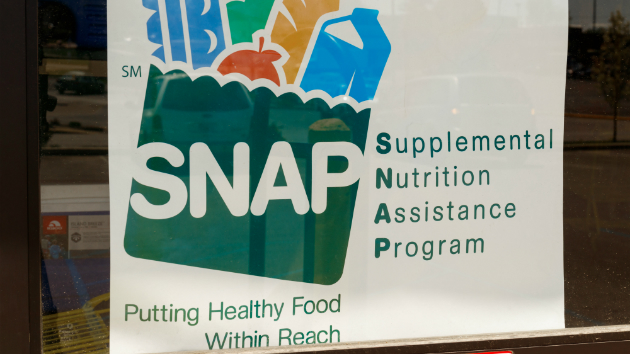 jetcityimage/iStock(WASHINGTON) — Food stamp recipients will have access to their full benefits for February, even if the partial government shutdown continues, U.S. Department of Agriculture officials announced Tuesday night.
USDA said they will work with states to load benefits onto recipients' cards by Jan. 20, just within the deadline for a provision that allows them to pay out benefits, even without a budget.
Food and Nutrition Service Administrator Brandon Lipps told reporters they expect to pay out the full $4.8 billion in Supplemental Nutrition Assistance Program, or SNAP, benefits for February, which should cover full benefits for all 38 million Americans that use the program commonly known as food stamps.
"I know there's been genuine concern across America as to what will happen to these benefits as the government shutdown continues," Agriculture Secretary Sonny Perdue told reporters on Tuesday night.
"You've heard me say before our motto here at USDA is to 'do right and feed everyone.' With this solution I think we've got the feed everyone part handled and I believe that the plan we've constructed takes care of the do right part," he said.
People who use food stamps will be able to access them earlier than usual. USDA officials said this is similar to how they can issue benefits early during natural disasters and states will have to accelerate their normal process to distribute the benefits early.
The USDA said the department is using a provision in the continuing resolution that expired on Dec. 21 that allows agencies to spend money within 30 days, even without its budget for the next fiscal year.
"The continuing resolution that just expired allows the federal government to obligate payments within 30 days of its expiration for particular programs including the SNAP program," Lipps said. "States under this scenario we'll have until Jan. 20th, which is in that 30-day period, to obligate these funds and make them available on the recipient's cards which allow us to access the funds under that continuing resolution."
Lipps said anyone applying for benefits in February should be on the standard timeline.
The department will not tap in to the $3 billion contingency fund for SNAP, which would not have been able to cover all benefits paid out every month. Some people who receive food stamps said they were worried they would have less money to buy healthy food if they only received a percentage of their usual benefits.
Danielle Baker, a mother of four in Oklahoma, told ABC News her family would have to cut back on fresh fruits and vegetables if they lost some of their benefits.
"It's just too difficult to buy fresh food with just the little bit of money we have from his paychecks," she told ABC News' Start Here about her husband's paycheck.
Other nutrition programs like the Women, Infants and Children program, or WIC, and programs that provide school lunches have enough money to continue into March, Lipps said.
The USDA said they will immediately start looking into options to provide benefits in March as soon as February benefits are set. Perdue said he encourages congressional leaders to fully fund the USDA before another solution is necessary.
"We've provided an additional month of SNAP benefits with this solution, I believe that gives Congress ample time to act," he told reporters.
Copyright © 2019, ABC Radio. All rights reserved.