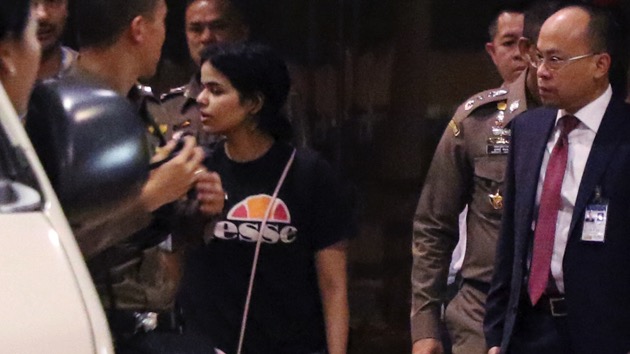 STR/AFP/Getty Images(LONDON) — The United Nations granted refugee status to a Saudi woman on Wednesday who was publicly pleading for help in Thailand.
Eighteen-year-old Rahaf Mohammed al-Qunun started calling for support on Monday via Twitter. She said Thai authorities took her passport as she was trying to fly to Australia, where she planned to apply for asylum. She claimed her family abused her.

“Please help,” al-Qunun posted on Twitter, “I am in Bangkok about to be forced on a flight back to Saudi where my life is in danger.”
Al-Qunun barricaded herself in her hotel room in the Bangkok airport after authorities tried to remove her from her room. She said they were attempting to force her to board a flight to Kuwait, where she had flown to Thailand from.
She uploaded videos to Twitter of her interactions with Thai authorities and pleas for help, writing, “I want UN!” and “I want UNHCR."
Hours later, Melissa Fleming, chief communications spokesperson for the United Nations High Commissioner for Refugees (UNHCR) wrote on Twitter that Thai authorities granted the agency access to al-Qunun.
“UNHCR has been following developments closely and immediately sought access from the Thai authorities to meet with Ms. Mohammed Al-qunun, 18, to assess her need for international protection,” the agency said in a statement.
On Wednesday, the UNHCR officially gave her refugee status after reviewing her case. Thai officials then agreed to let al-Qunun leave the airport with UNHCR officials.
On Wednesday, 48 hours after her ordeal began, al-Qunun posted a photo of herself on Twitter. “Hey… I’m happy,” she wrote.

NAACP calls on athletes not to sign with Texas teams over voting, abortion laws
Garland, under GOP attack, defends memo on violent threats against school board officials
Bill Hader explains why he’s so tired working on ‘Barry’ after the pandemic, and making ‘Addams Family 2’ with parents in mind
Fifteenth person claims to be the child of the late DMX
Family of Elijah McClain reaches settlement with Aurora, Colorado
DOJ pledges independence after Biden calls for prosecutions of those who defy Jan. 6 committee subpoenas