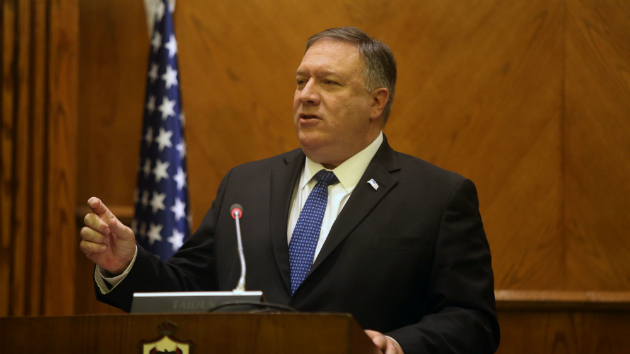 Jordan Pix/Getty Images(BAGHDAD) — Secretary of State Mike Pompeo made an unannounced stop in Iraq on Wednesday as part of a larger tour of the Middle East in which he is reassuring partners of America's presence in the region following President Donald Trump's surprise decision to withdraw U.S. troops from Syria.
Pompeo met with top Iraqi officials in Baghdad, including Prime Minister Adil Abd al-Mahdi and President Barham Salih, before stopping in Erbil, the capital of Iraqi Kurdistan.
"We certainly talked about the president’s decision to withdraw from Syria, but we focused more importantly on the enormous important impact of the Iraqi government formation process," Pompeo told reporters before departing Erbil, referring to the new Iraqi government which took over this past fall.
"Real progress has been made since the elections in Iraq which I think will put this country and this region in a far better place," he said, adding that Washington and Baghdad share a common understanding about the fight against ISIS and the importance of countering Iran.
Pompeo was adamant that the growing rift between the U.S. and Turkey over the protection of the Kurds would have no effect on the withdrawal of U.S. forces from Syria and that America's Kurdish allies in Syria would be protected.
On Tuesday, Turkish President Recep Tayyip Erdogan refused a meeting with National Security Adviser John Bolton and said publicly that his December phone call with Trump did not address the Kurds — who have been valuable U.S. partners in the fight against ISIS, but are viewed as terrorists by Ankara, which has routinely threatened to target them.
Meanwhile, U.S. officials, including Pompeo, have insisted that protection for the Kurds is one of the conditions that must be met for withdrawal.
“What I said last week is that these are folks that have fought with us, and that it’s important that we do everything we can to make sure that those folks that fought with us are protected," Pompeo told reporters in Erbil. "And Erdogan has made commitments, he understands that — I think he uses the language that he has no beef with the Kurds. We want to make sure that that’s the case."
“[Erdogan] talked about terrorists being an existential threat," Pompeo continued. "We acknowledged that there is a threat to Turkey from terrorists, and we will be very supportive. Any place where we find extremists and terrorists, we’re prepared to support whatever country.”
Pompeo's tour of the Middle East includes planned stops in Jordan, Egypt, Bahrain, the United Arab Emirates, Qatar, Saudi Arabia, Oman, and Kuwait.
Trump visited a U.S. air base in Iraq for several hours on the day after Christmas but did not meet with Iraqi officials.
During that visit, the president said the U.S. could still use bases in Iraq for its operations against ISIS in Syria. And officials have said the U.S. does not intend to pull its approximately 5,200 troops from Iraq, which have largely been focused on training and advising Iraqi Security Forces in their fight against terrorism.
Copyright © 2019, ABC Radio. All rights reserved.