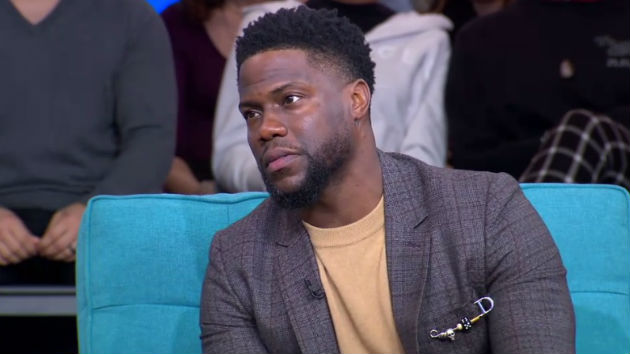 ABC(NEW YORK) — On ABC's Good Morning America Wednesday, Kevin Hart had a direct response for people who wanted to hear more from him about his Oscar-hosting controversy.
"I'm over it," Hart said multiple times on GMA when asked about the controversy, which saw him stepping down from the Oscar job after homophobic tweets he sent in the past resurfaced.

"There's no more conversation about it…I'm over that, I'm over the moment," he said.
Hart added that he apologized back in the late 2000s when he first wrote the comments, and multiple times after.
"I'm not giving no more explanation of who I am," the comic told his friend and GMA co-host Michael Strahan, insisting, "I'm just done…I've said everything I can possibly say."
He continued, "If you didn't [hear the apology], I don't know what you're looking for…I'm a good person, I love to love, if you don't see that, then it's a problem with you."
When asked if he is hosting the Oscars this year, he simply said, "No," adding that as a "perfectionist," he wouldn't ave enough time to prepare at this point.
But would he ever host the telecast in the future?
"It's hard to predict what can happen," he said. "I don't want people to think there's a thing about me and the Academy. There isn't. The Academy are amazing people."
His comments come two days after a mea culpa on his SiriusXM show Straight from The Hart, during which he apologized yet again, but complained that he hadn't gotten any credit for having done so.

Hummer EV truck shows it can compete with its gas-powered rivals
Supreme Court to take up Texas abortion law but declines to block it
Clinton shares first update on recovery following hospitalization: ‘I’m really glad to be back home’
‘Tough As Nails’ host Phil Keoghan looking to past contestants to keep things fresh on season 3
“I’m an aging superhero”: Jason Momoa tells Ellen of his ‘Aquaman’ injuries
Yvonne Orji to host Amazon’s ‘Yearly Departed’; Michael B. Jordan gushes over working with Denzel Washington