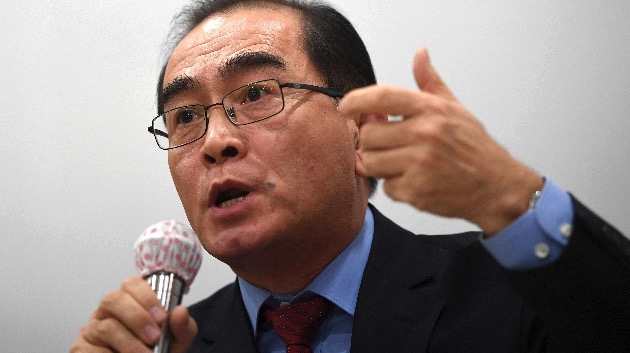 JUNG YEON-JE/AFP/Getty Images(SEOUL, South Korea) — A former North Korean diplomat who defected to South Korea in 2016 put out a call to the governments of Italy, South Korea and the United States to help facilitate his former colleague's reported attempt to leave the country.
“I urge the Italian government to follow international law and the spirit of humanity to guarantee every condition is met so that political asylum seeker Jo Song Gil and his family can go to the country of their choice,” Thae Yong Ho, who served as the North Korean deputy ambassador to the United Kingdom before defecting, said at a press conference in Seoul on Wednesday.
Thae also had a message for Jo Song Gil, the acting North Korean ambassador to Italy, who is reportedly seeking political asylum in the U.S. after leaving the embassy last November.
“I am telling you as a friend. Song Gil, do not worry. If you feel unsafe we will actively make an effort to urge the Italian embassy and [authorities] there. So we could at the least help you gain peace of mind. We respect your choice [of which country to seek asylum], but you have a home country, the Republic of Korea,” Thae said.
Jo, 44, and his family are reportedly under the protection of Italian intelligence, Italy’s La Repubblica newspaper reported last Friday, citing an unidentified diplomatic source.
Italy had not received a request for political asylum from Jo as of last week, a spokesperson for the Italian foreign minister in Rome confirmed to ABC News.
Jo and his wife are from a politically powerful family of diplomats and have maintained a luxurious lifestyle in Pyongyang, according to Thae, who went to the same university with Jo and knew the family “quite well." Jo also guided Thae’s family to sites in Vatican City in 2008 while he was a student in Italy.
“As parents, they probably could not force their children, who already are aware of democracy and human rights from living in Europe, back to hell like North Korea. They must have thought that the last thing they could do for the children is to give them freedom,” said Thae, recalling his own defection with his two sons.
Copyright © 2019, ABC Radio. All rights reserved.