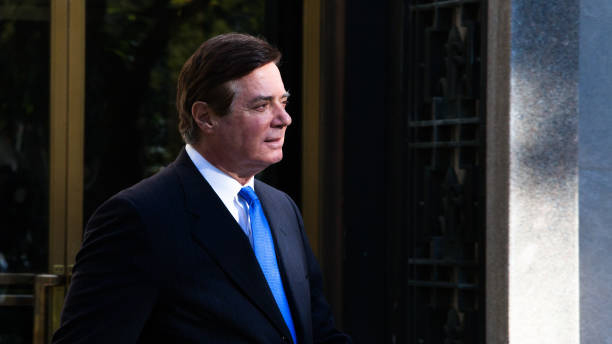 Keith Lane/Getty Images(WASHINGTON) — The revelation Tuesday that federal prosecutors have accused former Trump campaign chairman Paul Manafort of sharing internal polling data on the 2016 presidential election with a suspected Russian intelligence officer may be another piece to special counsel Robert Mueller’s puzzle, but experts on the matter say Tuesday’s inadvertent disclosure leaves plenty of unknowns in its wake.
“This revelation really raises more questions than answers,” said Robert Mintz, a former prosecutor now in private practice, “but it is significant because it provides additional evidence of high-level contacts between the Trump campaign and persons with ties to the Kremlin.”
News of Manafort’s coordination with Konstantin Kilimnik, a suspected former Russian intelligence officer, came to light by mistake on Tuesday when his defense team failed to properly redact portions of a court document meant to defend their client from accusations that he lied to investigators.
It was an embarrassing gaffe for Manafort’s legal team. But that information amounts to little more than hints at a larger conspiracy, according to Kendall Coffey, a former U.S. Attorney.
“While sharing polling data with a foreign national is not itself a federal crime, it suggests an interest in promoting the campaign beyond U.S. borders,” Coffey said. “Polling crosstabs and other deeper details can help create a strategy to impact an election.”
Any potential impact on the election is exactly what the special counsel’s office and congressional investigators are keen to uncover.
“Ultimately, this information suggests that the special counsel is building a bridge that, if completed, could have dramatic consequences for the White House,” Coffey said.
“The question is why,” asked Rep. Adam Schiff, D-Calif., chairman of the House Intelligence Committee, in an interview on Tuesday. “Why would Russians be interested in polling data on an American campaign? Why would that be of value? How would the Russians make use of that?”
With Democrats back in the majority in the House, Schiff said he plans to reinvigorate his panel’s investigation into possible Russian collusion, telling ABC News he hopes to “get the answers to all these questions.”
Coffey and Mintz agreed that while Manafort’s disclosure of polling information to Kilimnik may not present any immediate legal exposure for the onetime campaign chairman, it could precipitate a larger narrative of criminal intent.
“It is not surprising that Manafort was not charged criminally in connection with this conduct,” Mintz said. “This disclosure, by itself, is not necessarily evidence of criminal conduct – but could potentially play a role in a larger conspiracy.”
The implications of Tuesday’s developments, however, are not shared by all.
Former prosecutor and criminal defense attorney John Lauro does not see the inadvertent disclosure as particularly significant.
Lauro told ABC News that the government often has information from wiretaps and emails and then will test the cooperating defendant to see if he tells the truth. These revelations may simply show that “Mueller considers it an example of Manafort not being totally cooperative.”
“Obviously, Mueller caught him in a lie,” Lauro said Wednesday. “And that presumably doomed the cooperation.”
Manafort is already facing lengthy prison sentences for charges brought by the special counsel’s office in two jurisdictions. In Virginia, a jury convicted Manafort on eight counts of tax and bank-fraud in August. In September, he agreed to fully cooperate with prosecutors and plead guilty to two counts of conspiracy in a separate case in Washington, DC.
But that plea deal fell apart after prosecutors accused him of lying. Manafort’s sentencing in Virginia is scheduled for February 8 and in Washington, DC, on March 5.

‘The Bachelorette’ recap: A liar among the group leaves Michelle and her suitors scrambling for answers
How did Puerto Rico’s electric system become so chaotic? Experts weigh in
Supply chain questions answered, plus tips and solutions for smart shopping
Ahmaud Arbery murder case may evoke Georgia’s history on race: Experts
Holiday travel may be more chaotic than ever this year, transportation experts say
Fungal disease on the rise in West possibly tied to changing climate patterns: Experts