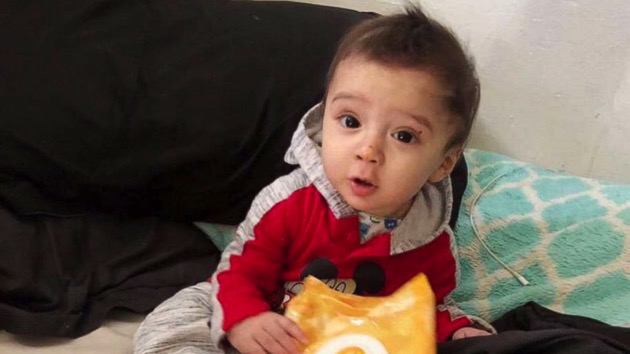 San Antonio Police Department(SAN ANTONIO) — A father allegedly "staged" his son's kidnapping to cover up foul play involving the child, San Antonio police said, as the search for the baby intensifies.
"Without a doubt … this was a staged event," San Antonio Police Chief William McManus told reporters Monday.
Authorities initially said on Friday that 8-month-old King Jay Davila was reported to be kidnapped while inside his father's car.

PLEASE RT: We need your help locating 8-month-old King Jay Davila who was taken while inside his fathers car on the 300 blk. of Enrique Barrera near SW 34th Street. Car was found nearby by Rodriguez Park. He was last seen wearing blue onesie. Call 911 immediately if you find him. pic.twitter.com/Y2Yc7cH73R

Police then shared surveillance video of the woman they believed stole the car.

PLEASE RT: Watch video of female suspect last believed to be with 8-month-old King Jay Davila last night. Call us if you have any information and please share. pic.twitter.com/3WRQXoqdHx

McManus said Monday that the woman in surveillance video was identified as a cousin of the baby's father, Christopher Davila.
The child was not in the car, which was recovered later on Friday at a park.
Police believe the alleged staged kidnapping was "to cover up foul play involving King Jay Davila," McManus said, though he declined to elaborate.
Davila was arrested on Friday and charged with endangering a child, police said.
His cousin was arrested and charged with an unrelated offense, McManus said.
"The father spoke with the media from jail and he spent more time speaking with the media, answering media questions, than he spent with us, answering our questions," the chief said.
Davila spoke to ABC San Antonio affiliate KSAT from jail on Saturday, saying the police investigation wasn't looking in the right direction.
"They just need to focus on where the car was located," he said.
Investigators are focused on finding King Jay, McManus said. Asked if police believe the baby is alive, McManus would only say authorities believe this was foul play.
"We know that there's more people out there that have more information on this case," he said, warning, "Even if you are not directly involved in this, if you are withholding information, if you have lied to police, we will charge you."
Davila remains in jail and is due to appear in court on Feb. 27. His attorneys did not immediately respond to ABC News' request for comment.
Copyright © 2019, ABC Radio. All rights reserved.