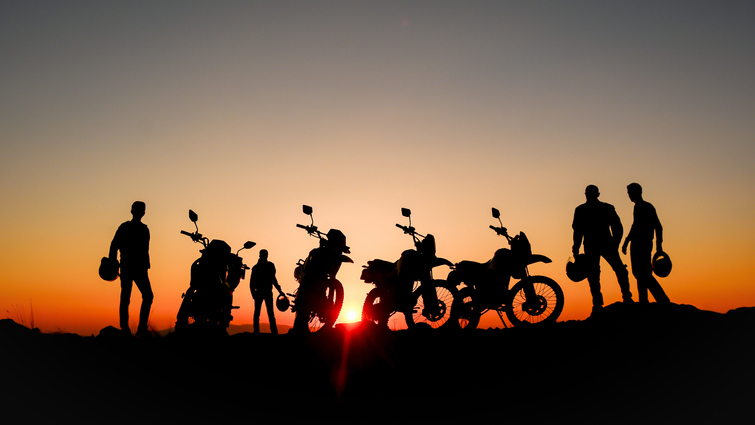 Huseyin Bostanci/iStock(LONDON) — A motorcycle group has taken the radical step of patrolling the streets of London to prevent scooter crime — including both crimes committed while on scooters or mopeds and the theft of scooters and other two-wheeled vehicles.
Footage obtained by ABC News shows the group, Biker Biker, out on night-time patrols in the streets of London. Despite a police crackdown on scooter crime, the crime rate remains extremely high in the capital.
Biker Biker, which was set up in 2010, recently stepped up its activities and now has nearly 15,000 followers on its Facebook page. The founder, who wishes to remain anonymous, told ABC News he set up the group after three of his motorcycles were stolen to prevent further crimes happening to others.
“I wanted to reach out to other victims and try to prevent such things happening rather than play policeman and try to cure the problem,” he said. “I wanted to hit at the very base level of motorcycle theft. We as a small group started to patrol and look for stolen bikes without being noticed, but then we decided to go public after a number of years, and since then, we have had a lot of support from companies and the public.”
Between January 2018 and December 2018, there were 13,721 offenses committed on scooters (or mopeds) in London. That amounts to 38 per day -– more than one an hour. Astonishingly, this is a reduction of 41.6 percent from 2017 which saw 23,477 offenses committed on scooters, the Metropolitan Police told ABC News.
They credit stronger police work, including a new controversial "ramming" tactic, which has resulted in two potential lawsuits due to injury, as reported by ABC in December.
“We patrol the streets in a large group to deter would-be thieves from operating in that area,” the founder said. “We plan our areas using social media intelligence including fake accounts to infiltrate the theft rings. We also offer a free recovery service thanks to Knights Recovery and Transport, who will deliver a found bike free of charge.”
Biker Biker patrols can lead participants into direct confrontation with would-be motorbike criminals, as the dramatic footage shows.
However, Biker Biker told ABC News they always act within the law and regularly communicate with the Metropolitan and Surrey Police forces.
The group now has hopes of expanding the organization across the Atlantic.
“We have successfully set up satellite groups all around the UK, from Dundee in Scotland to Sheffield [in England] and have plans to branch out to Australia and the United States this year,” the founder said.
The Metropolitan Police force said they do not support the group’s activities, but stopped short of saying what they were doing was illegal, telling ABC News that “individuals or groups who target potentially violent criminals could be putting themselves at risk.”
“The Met does not support activities by individuals or groups who target suspected criminals. Those who seek to take the law into their own hands put themselves at risk and will be liable to prosecution,” the force said.
“This type of action could jeopardize or interfere with ongoing investigations, and our advice to anyone who has information about a suspect or witnesses a crime is to contact police as soon as possible so it can be investigated and, where possible, bring people to justice.”