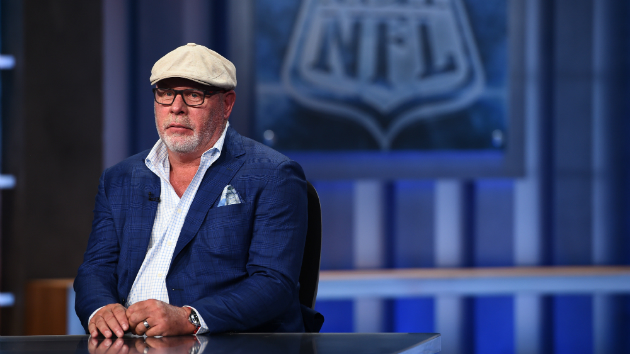 Melissa Rawlins / ESPN Images(TAMPA, Fla.) — Bruce Arians is stepping out of retirement and returning back to the football field.
The Tampa Bay Buccaneers announced late Tuesday that they have hired Arians as their next head coach. Both sides agreed to a four-year contract with a fifth-year option.
“Bruce Arians is one of the NFL’s most well-respected coaches over the past two decades and we are excited to have him leading our team," Buccaneers owner Bryan Glazer said in a statement.
"Bruce has played a large role in the development and career success of some of our league’s best players and we look forward to seeing him continue that work here with our franchise,” Glazer added.
Arians replaces Dirk Koetter, who was fired as Tampa Bay's head coach on Dec. 31 after three seasons with the team. The Buccaneers finished the 2018 season with a record of 5-11.
This past season, Arians, 66, worked as a NFL game analyst for CBS. The year before, he retired as the head coach of the Arizona Cardinals after five seasons with the team.
In a tweet late Tuesday, Arians said he was "proud and honored" to be named the next head coach for the Buccaneers.

Proud and honored to be named the Head Coach of the @Buccaneers!! To work for such great ownership, the Glazer Family, and with GM Jason Licht. Time to get to work!! #tampaBAy #buccobruce #GoBucs pic.twitter.com/IlZE5duEME

Bjorkgren out as Pacers coach after one season
Steve Clifford out as Orlando Magic coach
Duke men’s basketball coach Mike Krzyzewski to retire after 2021-22 season
Danny Ainge, Celtics President of Basketball Operations retiring; coach Brad Stevens taking over role
NBA coach goes off on bad behavior by fans after incidents across league
Chris Paul convinces coach not to sit him for Game 4