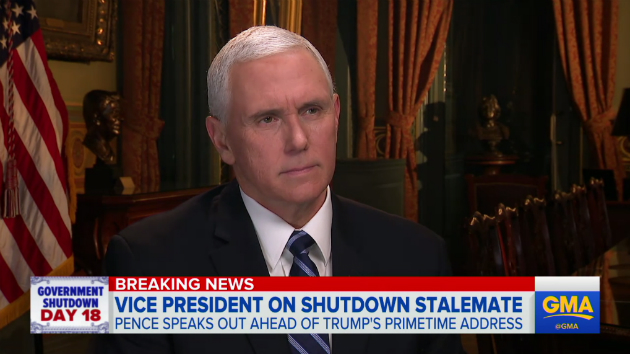 ABC News(WASHINGTON) — Vice President Mike Pence on Tuesday claimed the "crisis" at the southern border is a "bona fide emergency."
The vice president said in an interview with ABC News that President Donald Trump is "prepared to do what's necessary to address what is a real humanitarian and security crisis at our southern border."
But Pence did not say whether the president would declare a "national emergency" over border security, which Trump has said he has the authority to do if Congress does not fund the wall on the U.S.-Mexico border that he's demanding.
Trump is expected to address the nation Tuesday night from the White House on the border crisis that has led to a federal government shutdown. He has told congressional leaders that the government shutdown could go on for months — even a year or longer — if Congress doesn't approve funding for a border wall.
"The American people deserve to know that the situation on our southern border has become as The Washington Post said a 'bona fide emergency,'" Pence told ABC News Chief White House Correspondent Jonathan Karl.
The Washington Post article Pence is referring to called the influx of migrant families — and the difficulty Customs and Border Protection had dealing with the situation — "a bona fide emergency."
"Sixty-thousand people a month and for the first time on record, the vast majority of those are families, unaccompanied children and it simply is overwhelming the ability of our border patrol and customs agents to be able to address it," Pence said. "We need new resources. We need to build a wall. We need the Congress to come to the table and work with this president to address this crisis once and for all."
Karl pressed Pence on inaccurate statements that Trump has made during the government shutdown, now in its 18th day. Among those, Trump has falsely claimed that former President Barack Obama has a 10-foot wall built around his house and that four previous presidents have told him they wanted to build a wall.
All four previous presidents have put out statements saying they have never told Trump they wanted to build a wall.
Asked how American citizens can trust what Trump tells them, Pence said, "The American people aren't as concerned about the political debate as they are about what's really happening at the border."
Pence said Democrats in Congress and the Senate are ignoring the border situation. The president has said he is considering whether to declare a national emergency to go around Congress to address border security.
"It's just simply not true," Sen. Kamala Harris, a California Democrat, said in an interview on ABC's Good Morning America in response to Pence's statements. "There was a bipartisan effort out of the United States Senate and the United States Congress to pass funding of the government and the president is holding it up because of his vanity project, which is this wall at taxpayers' expense and at the expense of hundreds of thousands of workers who are working every day without being paid. So it's just simply not true. It's an emergency of his own creation."
Harris said if Trump declares a national emergency, Democrats are prepared to fight it.
"I think that there's no question that we will litigate and there will be litigation," Harris said. "Those other branches of government and the courts and the press will put checks on this outrageous conduct of this administration. If he declares an emergency, I think that we will see again the checks and balances kick in particular through the courts."