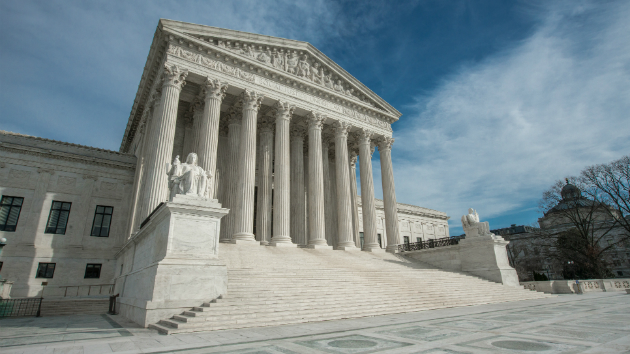 dkfielding/iStock(WASHINGTON) — Members of the Crow Tribe hunt elk to feed their families.
The state of Wyoming says they can't kill the animals on federal forest land without a permit.
The Supreme Court will now decide whether an 1868 treaty protects the Native Americans' right to hunt.
During a 2014 hunting expedition, Clayvin Herrera and three other tribal members pursued a small herd of elk as it moved from the Crow Reservation in Montana to the Bighorn National Forest in Wyoming. There the hunting party "shot, quartered and packed" three elk, and carried the meat back to the reservation, dividing it among their families, according to court documents.
Wyoming game officials later tracked down Herrera and charged him with hunting off season and without a license. A state court convicted Herrera, and he was ordered to pay an $8,000 fine and give up hunting privileges for three years.
Herrera said the Second Treaty of Fort Laramie from 1868 — between the United States and Crow Tribe, before Wyoming became a state — expressly allows tribal members to legally hunt in unpopulated federal forest lands at any time.
The treaty, which established the tribe's present-day reservation, states that members "shall have the right to hunt on the unoccupied lands of the U.S. so long as game may be found thereon, and as long as peace subsists among the whites and Indians on the borders of the hunting districts."
Wyoming contends that the treaty only meant to afford "temporary" rights to hunt off the reservation and that when the state was created in 1890 those rights were terminated. The state also argues that President Grover Cleveland's designation of the land as a national forest in 1897 effectively rendered it "occupied."
Moreover, the state is arguing that federal courts have already resolved the issue: Twenty-five years ago, in a similar case involving the Crow Tribe, the Tenth Circuit Court of Appeals concluded, “The Tribe and its members are subject to the game laws of Wyoming."
Herrera disagrees, saying a subsequent Supreme Court decision in 1999 overruled the notion that statehood implicitly terminated existing U.S. government agreements with Native Americans.
"Neither the 1868 treaty nor any act of Congress contains any suggestion that Wyoming's admission to the Union would abrogate the hunting right, and the mere creation of the Bighorn National Forest did not render that land 'occupied' so as to abrogate the hunting right," Herrera's attorneys argue in a brief to the high court.
Herrera, a single father of three, insists hunting rights are deeply personal. Facing tough financial times in 2014, he says he went out to shoot an elk to "live off" the meat during the winter, according to court documents.
"Affirmance not only would strip a sovereign Indian tribe of a longstanding, treaty-guaranteed right of enormous practical and spiritual significance," Herrera's legal team writes in its brief to the high court, "it would threaten the rights of numerous other Indian tribes that long ago reserved similar off-reservations protections in their own treaties with the U.S."
The Trump administration has taken Herrera's side, writing in a brief to the court that, in its view, neither Wyoming statehood nor creation of the national forest terminated the Crow Tribe's hunting rights under the treaty.
Copyright © 2019, ABC Radio. All rights reserved.