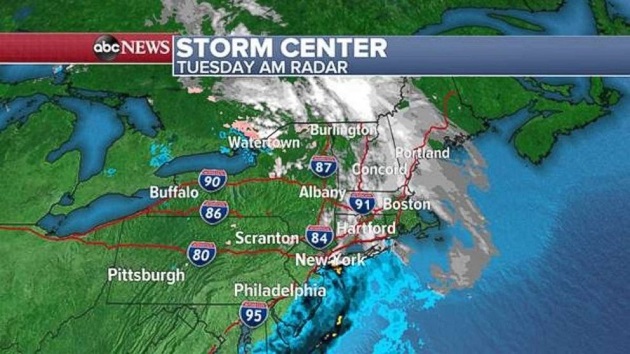 ABC News(NEW YORK) — It was lightly snowing early Tuesday in New York City's Times Square as the first of several rounds of snow hit the Northeast.
This same storm system brought snow to the Midwest on Monday. Parts of Michigan's Upper Peninsula saw more than a foot as wind gusts of up to 50 mph created huge waves along the Great Lakes.
The storm is moving fast through the Northeast, so accumulation there may be kept to a minimum, but it could be quite slick throughout the region.
Wind alerts currently are in effect in the Midwest as the Northeast braces for wind and snow.
Snow showers and gusty winds are expected to continue over the next 48 hours, while the Midwest again could see gusty winds — as high as 50 mph — move in behind the storm and impact larger cities including Chicago and Indianapolis.
Wind gusts are expected throughout the upper Midwest Tuesday morning.
These wind gusts are expected to move into the Northeast on Wednesday where they could hit 40 mph. They're expected to last into Thursday.
Significant snowfalls are expected through Wednesday evening in much of the Northeast.
Parts of New York state could see more snow accumulation through Thursday. Areas south of Buffalo could see a foot while parts west of Albany may see half a foot.
Another impressive-looking Pacific storm is nearing the West Coast, with rain bands heading toward Northern California and Southern Oregon and expected to hit later Tuesday night. Conditions including gusty winds are expected to last into Wednesday. Rainfalls of 2 to 4 inches across the region are possible.
Mudslides and avalanches will continue to be potential dangers in the western U.S. over the next few days.

261 vehicle crashes in 18 hours as snow sweeps across Minnesota
Blizzard warning issued for Hawaii with at least 12 inches of snow forecast
Amid spread of omicron variant, CDC expected to require negative COVID-19 test 1 day before flying to US
Denver still waiting for first snow of season, breaking record
Details on some I-80 crashes Tuesday
Multi-vehicle accident causes I-80 road closure overnight