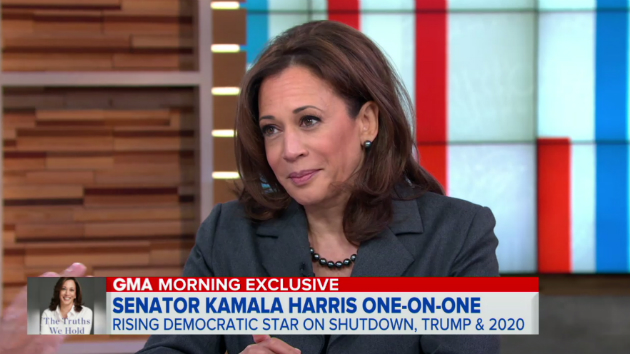 ABC News(NEW YORK) — Sen. Kamala Harris, who is considering a 2020 presidential campaign, opened up about the influence her late mother, Shyamala Gopalan Harris, had on her career, saying that she was empowered to take personal action to fix problems she encountered.
"I was raised that, when you see a problem, you don't complain about it, you go and do something about it," Harris, D-Calif., said in an interview Tuesday on ABC News' Good Morning America.
"My mother — I would get so upset at her when I got older. I would come home with a problem, other parents would say, 'Oh, darling, I'll take care of it.' My mother, the first thing she would do, she would look at us and she'd say, 'Well, what did you do?'" the senator recalled. "So I think this is that moment."
Harris said her mother is the "star" of her two books, The Truths We Hold: An American Journey and Superheroes Are Everywhere.
When asked by ABC News' George Stephanopoulos if she would run in the 2020 presidential election, Harris demurred, saying, "I am not going to decide right now."

Harris invites all female US senators to have dinner at Naval Observatory
Harris kicks off tour of Southern states to boost vaccination rates
Florida’s Democratic Rep. Val Demings officially launches campaign to unseat GOP Sen. Marco Rubio
Anthony Ramos shares how ‘In the Heights’ changed his life: “No one was rushing to write the next Latino barely five-nine, freckled lead role”
Harris defends telling migrants ‘do not come,’ not visiting US-Mexico border
Mother arrested after body of 7-year-old son is found