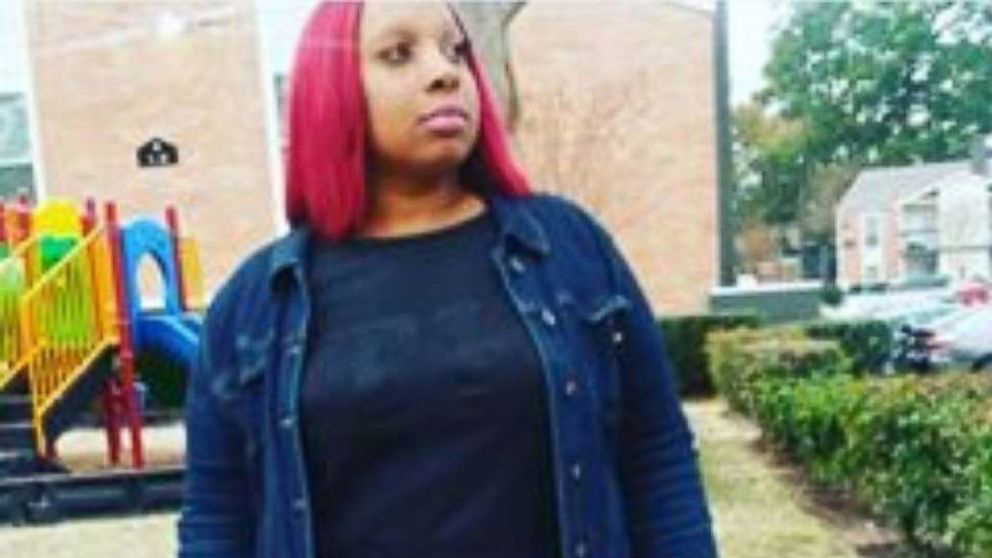 Courtesy Ashley Brown(HOUSTON) — A Texas woman, who says she is more than eight months pregnant, says a sheriff's deputy shot her twice in the back with a stun gun and arrested her on suspicion of shoplifting in an incident caught on cellphone video that she claims was a misunderstanding over a Christmas gift card.
Ashley Brown, 29, who says she is due to give birth to a girl on Feb. 3, told ABC News on Tuesday that she was shot with a Taser after she said police wrongly accused her of shoplifting clothing from a Houston store.
"She told me to put my hands behind my back, and I'm like, 'What for?' I told her I'm eight-and-a-half months pregnant. I said, 'Ma'am, I'm not going to put my hands behind my back, but I will walk back in the store with you.' That's when she started getting aggressive with me," Brown said of the female Harris County sheriff's deputy who deployed the stun gun on her.
But in a statement to ABC News, Harris County sheriff's officials told ABC News that the deputy deployed her stun gun only after Brown resisted arrest and struck the deputy with her purse. The statement also says Brown was found to be in possession of $69.98 worth of stolen clothes.
"As with all use-of-force incidents, this case will be reviewed to determine whether the deputy followed the appropriate policies and procedures," the statement reads.
The incident occurred Friday morning outside an Academy story in northwest Houston and part of it was witnessed and captured on cellphone video by Brown's aunt, Kizzy Winfrey.
"It wasn't right. They shouldn't have treated her that way," Winfrey told ABC News on Thursday.
Brown said she went to the store to redeem what was left on a gift card she received for Christmas.
She said she initially set off an alarm when she tried to leave the store but went back in the store to shop.
"It [the alarm] had gone off on a man before and then it went off on me," Brown said.
Brown said she picked out a shirt for her son and stretch pants for herself, but when she presented her gift card to a cashier there was only enough on it to pay for the shirt.
She said she left the pants at the counter and walked out with the shirt after paying for it with the card.
But when she got outside, a sheriff's deputy was waiting for her and ordered her to put her hands behind her back to be handcuffed, she said.
Brown said she refused to comply with the orders, but volunteered to go back into the store to clear up the situation. That's when she claims the deputy grabbed her by the arm and attempted to handcuff her. She denied hitting the deputy with her purse but said she drew her arm back when the deputy grabbed her.
"She tasered me and I fell face first on the ground. I hit my head on the ground," Brown said.
Brown said that while she was on the ground, the deputy deployed the stun gun again to her back. She said another deputy who responded jumped out of his patrol car, put his hand on her back and "slammed my face into the ground."
Following the encounter, she was taken to a hospital for an examination.
"It took them like 20 minutes to find my baby's heartbeat," Brown said. "By this time, I'm hysterical because I don't know what's going on."
She said doctors were able to determine that the baby she is carrying was fine, and released her to sheriff's deputies, who arrested her on suspicion of theft and resisting arrest.
In the statement to ABC News, Harris County Sheriff's officials said the deputy involved in the encounter deployed her Taser only after Brown assaulted her. The deputy was off-duty at the time but working security at the Academy store, according to the statement.
"The deputy and the store manager approached the female suspect after she exited the store, and the deputy instructed the woman to come back inside the store," the statement from the sheriff's office reads. "According to the deputy, the suspect refused to comply and attempted to leave. The suspect physically resisted the deputy, striking her in the head with a purse and pulling away from her grasp.
"After efforts to physically restrain the suspect were unsuccessful, the deputy deployed her Taser, which allowed the deputy to gain control of the suspect."
Brown admitted to ABC News that she has been arrested for theft in the past, including a case in December at a Target store in Houston.
"I have stuff on my background, yes I do," said Brown, who works at a McDonald's restaurant in Houston. "I'm not ashamed of what I used to do. I've done served time. But that doesn't give you the right to tase me."
Brown said she has a court hearing on the theft charge she is facing on Feb. 6.