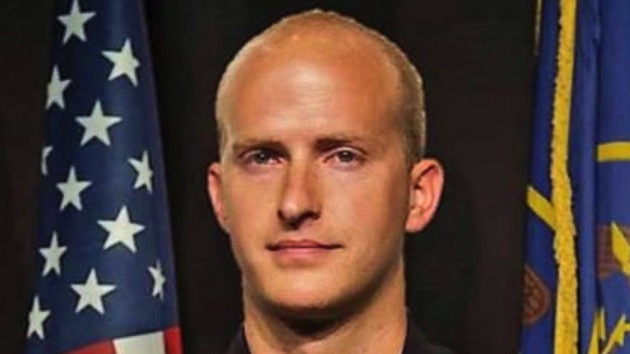 Provo Police(PROVO, Utah) — A parole fugitive suspected of gunning down a young Provo, Utah, police officer was shot and injured during the confrontation by his alleged victim, according to police.
Officer Joseph Shinners, 29, was trying to apprehend the parole fugitive, who had active warrants for his arrest, in the nearby town of Orem when he was shot Saturday night, authorities said.
Shinners managed to return fire, striking his suspected killer, identified as parole fugitive Matt Frank Hoover, authorities said.
Shinners died at a hospital late Saturday night, Provo Police Chief Richard Ferguson said.
Fellow officers apprehended the injured suspect that night and took him to a hospital where he remains under guard, authorities said.
Hoover, whose lengthy arrest record includes drug and theft charges, is in stable condition, Orem Police Lt. Trent Colledge told ABC News Tuesday.
Hoover allegedly made recent threats of violence toward police, authorities said.
He is expected to be charged with aggravated murder, attempted aggravated murder, possession of a weapon by a restricted person and possession of methamphetamine with a prior history, Colledge said. No court date has been set at this time, Colledge said.
Colledge called Shinners' slaying a "tragedy."
"He is no longer with us because a wanted fugitive did not want to go back to prison," Colledge told ABC News via email. "He was an outstanding Officer that was just trying to make the community a safer place for all of us. We will forever remember the ultimate sacrifice he gave on that dreadful night."
Shinners, a Massachusetts native who was on the job for three years, is survived by his wife and 1-year-old son, Provo police said.
Shinners came from a family of service. His brother is a police officer and his father was a fire captain in Everett, Massachusetts.
His funeral will be held Saturday, the Provo police said.
Copyright © 2019, ABC Radio. All rights reserved.