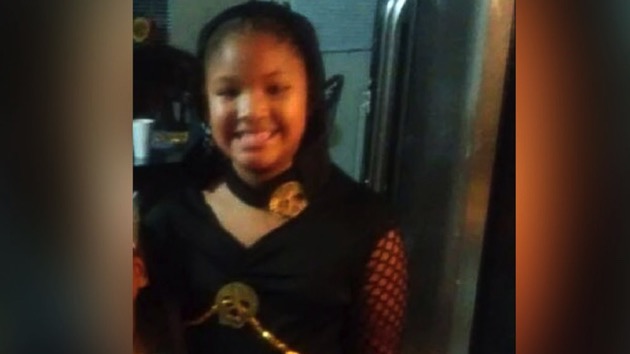 Harris County Sheriffs Office(HOUSTON) — Loved ones and friends of 7-year-old Jazmine Barnes filled a 2,000-seat Houston church on Tuesday for the funeral of the second-grader killed when a gunman opened fire on her family's car in what investigators suspect was a case of "mistaken identity."
A choir began the service at the Community of Faith Church as mourners filed by the white open casket. The service will be followed by a balloon release.
"I will implore the community, both locally and nationally, to have a conversation with all of our young people about the sanctity of life," said Bishop James Dixon, pastor of the Community of Faith Church, who is expected to speak at Jazmine's funeral. "We're hoping the grief of this moment will turn into the power to make the world a safer place for every child."
Many mourners attending the funeral wore purple, which was Jazmine's favorite color.
Jazmine's mother, LaPorsha Washington, described her daughter as a "lovable" little girl.
"Jazmine loved music. She loved dressing up. She told me she wanted to be a teacher," Washington said at a news conference last week.
Jazmine's life was cut short on Dec. 30, when a gunman opened fire on her, her mother and three sisters as they were riding in their car in northwest Houston. Jazmine, who was sitting in the backseat, was shot in the head and killed, while her mother was wounded in the left arm.
The Harris County Sheriff's Office launched a massive manhunt for a suspect initially described by Jazmine's 15-year-old sister Alxis and three other independent witnesses as a white man driving a red pickup truck.
But a tip given to social justice activist and journalist Shaun King led to a stunning break in the case and helped investigators identify two men suspected in Jazmine's death, authorities said. Detectives now believe the man in the red truck was just a bystander who pulled up next to Washington's car at a stop light and sped off as gunfire erupted, said Harris County Sheriff Ed Gonzalez.
On Sunday, Gonzalez announced the arrest of Eric Black Jr., 20, an African-American man, who confessed that he was involved in the shooting.
Black had been charged with capital murder in the case. A second suspect, Larry Woodruffe, 24, was also taken into custody but has yet to be charged in Jazmine's killing.
Black reportedly told homicide detectives that he fired shots from the rental car he was driving, prosecutors said during Black's court hearing Sunday. Black also allegedly told police he had the 9mm pistol at his home, which matched shell casings found at the scene of Jazmine's shooting, authorities said.
"This is not my son," Black's mother, Quishawna Walker, told ABC affiliate station KTRK-TV in Houston. "I know he confessed because he has a conscience. This is not the way he was brought up. This is not his character. I'm praying for both sides. I've always wanted justice for Jazmine."
Gonzalez said Jazmine and her family were targeted when the suspects mistakenly believed their car was occupied by someone they had previously had a confrontation with.
The high-profile shooting case prompted an outpouring of support for Jazmine's loved ones from people across the nation, including celebrities like former NBA great Shaquille O'Neal, Houston Texans wide receiver DeAndre Hopkins and actresses Gabrielle Union and Olivia Wilde.
Hopkins has pledged to donate his $29,000 game check from Saturday's Texans playoff game against the Indianapolis Colts to pay for Jazmine's funeral.
Lee Merritt, an attorney for Jazmine's family, told ABC News that Jazmine's parents want to use some of the money that's poured in from people across the nation to establish the Jazmine Barnes Foundation, which would provide scholarships to future school teachers, which the girl aspired to be.
"The parents of Jazmine have constantly emphasized that they don't want their daughter to die in vain, that they want her legacy to live on," Merritt said.
Copyright © 2019, ABC Radio. All rights reserved.