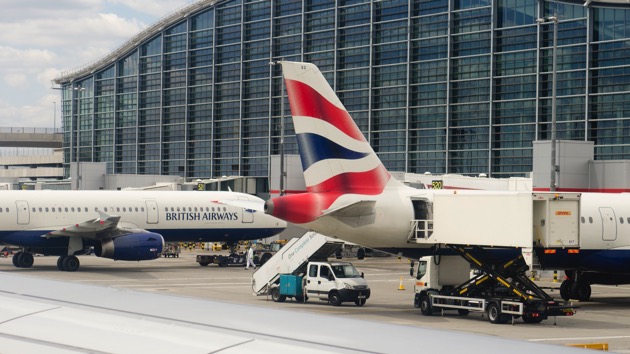 Franckreporter/iStock(LONDON) — Departures from London's Heathrow Airport, the UK's busiest hub, were briefly suspended today after a drone was sighted there, according to airport officials.
A spokesperson from the airport confirmed that a drone was sighted near or within the airport, prompting the precautionary suspension of departure flights, but less than an hour later, the airport press office confirmed that flights had resumed.
“We are currently responding to a drone sighting at Heathrow and are working closely with the Met Police to prevent any threat to operational safety," the airport's press office said in the initial statement. "As a precautionary measure, we have stopped departures while we investigate. We apologise to passengers for any inconvenience this may cause.”
The press office's later statement noted that they "continue to work closely with the Met Police to respond to reports of drones at Heathrow" and will "continue to monitor this situation."
No further details about the ongoing situation have been released.
This incident comes after operations at Gatwick Airport, about 30 miles southeast of Heathrow, were brought to a screeching halt amid the busy Christmas travel season because of drone sightings there.
Gatwick closed on the evening of Dec. 19 and for much of the day on both Dec. 20 and 21.
Gatwick is the country's second busiest airport, after Heathrow, according to 2017 data from the U.K.'s Civil Aviation Authority.
British Transport Secretary Chris Grayling said in a statement that they were prepared to respond with the same approach if need be.
“We are in contact with @HeathrowAirport concerning the drone sighting. I have already spoken to both the Home Secretary and Defence Secretary and the military are preparing to deploy the equipment used at Gatwick at Heathrow quickly should it prove necessary,” Grayling said in a statement tweeted by the Department of Transportation.