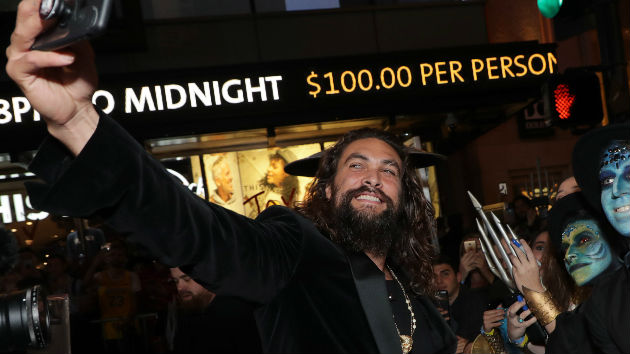 Eric Charbonneau(LOS ANGELES) — The king of the undersea world is over the moon after Aquaman has become the highest-grossing superhero movie in Warner Bros.' DC Comics Extended Universe — DCEU, to the geek set.
Jason Momoa took a few moments to Instagram a thank you to moviegoers for showing up in droves all over the globe to see his film. "I just wanna say 'Aloha' and 'I love you' to you all the friends and the fans" the affable former Game of Thrones star said, before adding with a smile, "it's even better the second time, so if you haven't seen it a second time, please do."
Evidentally, people have been: the movie, which also stars Nicole Kidman, Amber Heard, and Willem Dafoe, earned more than $260 million on our shores, but its worldwide total is approaching the billion dollar mark: it stands at more than $943 million — surpassing former DCEU champ Batman v Superman: Dawn of Justice.

It should be noted that the highest-earning DC Comics-based film is The Dark Knight Rises, which isn't part of the DCEU. It earned more than $1.08 billion in its run, and earned a posthumous Oscar for Heath Ledger's portrayal of The Joker.