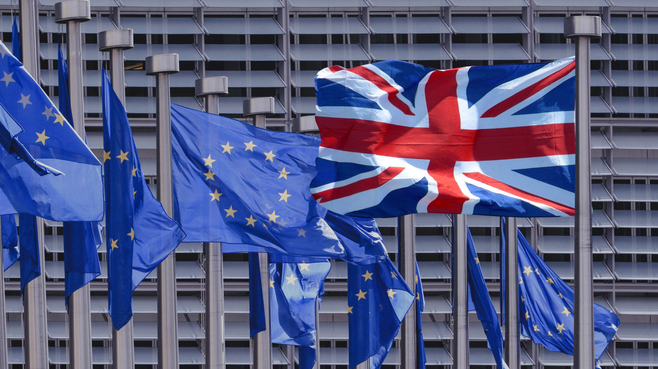 TheaDesign/iStock(LONDON) — Brexit got the Hollywood treatment for U.K. viewers on Monday night. With the final round of debates set to begin in Parliament on Theresa May’s deal on Wednesday, watching "Brexit: Uncivil War" must have felt like "Groundhog Day."
"Brexit: Uncivil War" features actors playing the real-life figures behind the vote, as the country once again relived the most divisive political campaign in recent British history.
The U.K. Parliament was expected to vote on the Prime Minister May’s Brexit deal in December, but she delayed the vote, which is now scheduled for Jan. 15. Starting Wednesday, another week of debating on the key issues of the deal will take place in Parliament. If May loses, the U.K. could leave the European Union without a deal.
The timing was almost too perfect for "Brexit: Uncivil War," which stars Benedict Cumberbatch. Written for Channel 4 by British playwright James Graham, the movie was based on extensive research and interviews with key players on both sides of the political landscape.
It follows the story of the 2016 referendum, with the inside story of the officially designated Brexit campaigners, Vote Leave, leading the charge against the government-led campaign to stay in the European Union, Britain Stronger in Europe. On June 23, 2016, Britain voted to leave the EU in a referendum. Leave secured 17,410,742 votes (51.89 percent), to Remain’s 16,141,241 (48.11 percent).
With the country in such a sensitive political moment, Graham recognized a need to approach the subject matter “responsibly” and “mindfully.”
“I’m a big believer in the power of drama and storytelling and its capacity to help us reflect on difficult things,” he told ABC News. “There’s nothing more complicated and divisive and difficult to have a rational response to than Brexit. We were determined to be as even handed as possible and speak to all sides.”
Cumberbatch leads the charge in the Uncivil War as Dominic Cummings, the little-known political strategist and anti-establishment figure who led the official Vote Leave campaign to victory with his powerful slogan: "Take Back Control." Since winning the vote, Cummings has since largely retreated from public life.
Graham is adamant that Brexit is part of a part of a “global” story.
“The conditions that created Brexit are not unique to the U.K. -– something is happening across western liberal democracies,” Graham said. “And it started way before the 2016 vote for Brexit or November that same year for [Donald] Trump, people just hadn’t identified this anti-establishment, populist feeling. When you combine that with the new [social media] platforms, the new technology which can exacerbate and spread some of those feelings and give voice to them, it gives an unpredictability and a shock factor to politics in America as well. You might argue that this is an origin story to Trump.”
Indeed, the film also features some interesting characters from North America. Billionaire financier and Breitbart backer Robert Mercer, Aden Gillett, makes an appearance, highlighting his alleged role in providing key data analytics services for the Leave campaign. Zack Masingham, the Canadian founder of data technology company Aggregate IQ, portrayed by Kyle Soller, plays an important role by reportedly enabling the Vote Leave campaign to target voters through social media.
Donald Trump’s former campaign strategist, Steve Bannon, is also briefly a character in the movie.
On Britain’s current predicament, Graham is sanguine.
“We are tearing chunks out of each other,” he said. “We somehow need to learn to listen and not to enter into these debates in such bad faith.”
The drama serves as a reminder of the sometimes toxic atmosphere of the referendum. The horrific murder of Remain-campaigning Member of Parliament Jo Cox a week before the referendum features heavily in the movie. She was killed by Thomas Muir, who was later convicted of murder and sentenced to life in prison.
The sentencing judge said the “murder was done for the purpose of advancing a political, racial and ideological cause namely that of violent white supremacism and exclusive nationalism most associated with Nazism and its modern forms.”
The main takeaway from "Brexit: Uncivil War" is that Brexit was about far more than just leaving the European Union. And with the final chapter of the Brexit debate set to begin on Wednesday, the world is getting ever closer to seeing how the real-life drama is going to end.
"Brexit: Uncivil War" will air in the U.S. on HBO on 19th January.

Treat yo self! Aziz Ansari reveals engagement during comedy set
Jon Stewart joins ABC’s ‘Live in Front of a Studio Audience: ”The Facts of Life”
See a life-sized house made of candy come to life on Hulu’s ‘Candified: Home for the Holidays’
“It’s the moment I’ve waited for my entire life”: Michael B. Jordan takes the reins of his career, and ‘Creed III’
Biden declines comment on report Trump tested positive for COVID days before debate
Awkwafina joining Nicolas Cage’s Dracula in upcoming monster movie ‘Renfield’